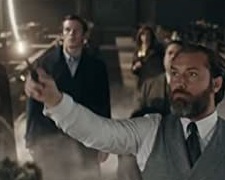 The Harry Potter wizarding universe is at an interesting point for Warner Bros. Pictures.  The first eight movies, all adapted from J.K. Rowling’s immensely popular books, were a box-office sensation.  That timeline culminated in 2011 with Harry Potter and the Deathly Hallows – Part 2 which generated $1.34 billion in global ticket sales and became, at that moment, the 3rd highest grossing movie of all time.

Rowling was then engaged to create a five-film prequel series which focused on key wizarding events in the first half of the 20th Century.  Fantastic Beasts and Where to Find Them was released in 2016 and was followed by Fantastic Beasts: The Crimes of Grindlewald.  The later made just $655 million at the global box-office (down $160 million on the previous film) and represented the lowest take in the franchise to date.  Reviews, from both critics and the public, weren’t great either.

For Fantastic Beasts: The Secrets of Dumbledore, a significant change has been made to the cast.  Mads Mikkelsen (Another Round) convincing steps into the shoes of dark wizard Gellert Grindelwald.  Johnny Depp, who appeared in the last two movies, was asked to “resign” in November 2020 after a British court ruled, to a civil standard, that he had physically assaulted his ex-wife, Amber Heard.  Also noticeable is the near-complete absence of Katherine’s Waterston’s previously prominent character, Tina Goldstein.  Reasons are given in the film for her relegation but they’re flimsy.

Uncannily predicting recent events in the United States, this new instalment is centred on the villainous Grindelwald and his attempts to rig an important wizard election.  He’s still trying to create a world where magical folk are in charge and humans are treated like second-rate citizens.  Our beloved heroes, guided by the astute Albus Dumbledore (Law), each have a part to play in saving democracy and ensuring Grindlewald isn’t falsely elected.

By a narrow margin, this is the best of the three Fantastic Beasts movies.  The story is easier to follow, there’s a better blend of comedy and drama, and Mikkelsen creates a worthy villain worth rooting against.  The use of magic is always opportune but it’s still nice to see it illustrated – whether it be as simple as a floating teacup… or as complicated as an eternal blood pact.  It’s also cool to return to Hogwarts, albeit briefly, to the backdrop of John Williams’ iconic theme.

That’s not to say there aren’t an equal number of weaknesses.  For a film which is 142 minutes long, it’s not offering much in terms of narrative and character advancement.  It reminds me of a television soapie where they create a key storyline and drag it out for weeks and weeks.  Where these characters finish up at the end of the movie isn’t all that different from where they were at the start of the movie.  It needed more pace, more urgency.

Directed once again by David Yates, Fantastic Beasts: The Secrets of Dumbledore will be closely followed in this post-pandemic world to see if it can alleviate the franchise’s downward trend.  Is there enough interest in these characters to maintain interest for another two movies?  This movie is watchable, but unlike the early Daniel Radcliffe-helmed Harry Potter movies, I’m not sure it’s memorable.