Review: Everything Everywhere All at Once 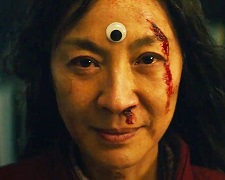 Over the past decade, there have been few major blockbusters to come out of Hollywood with as much ambition as Cloud Atlas.  The 172-minute epic, with a budget of over $100 million, featured six overlapping stories spread across five centuries with 13 featured actors playing 61 different characters.  Whether you liked it or not, you had to admire the risks taken by the three directors in giving us something so original and unexpected.  The key message – “everything is connected”.

I got that same vibe, in terms of both style and themes, from the craftily titled Everything Everywhere All at Once.  It’s a rich, wonderful, audacious project that will energize audiences like a cool breeze on a hot summer day.  There’s a lot going on (multiple viewings will help) but even if you can’t follow it all, you’ll still be swept up by its charm and vision.

To do my best to explain… let’s describe it as Sliding Doors on steroids.  In that Gwyneth Paltrow-led drama, we follow two alternate timelines – one where she catches her train on time, and one where she misses it.  Everything Everywhere All at Once sells an idea where that happens each time we make an important decision in our lives.  The end result is a seemingly infinite number of worlds, referred to as the “multiverse”, that feature a different version of us all.  It’s a lot to think about!

Front and centre throughout the film is Evelyn Wang (Yeoh), a Chinese-American woman who runs a small laundromat with her husband (Quan) in Los Angeles.  Her life is chaotic mess… but that’s largely her own doing.  She spends so much time fussing about minor, unnecessary things that she hasn’t noticed the deterioration in the relationships with her husband (Quan), teenage daughter (Hsu), and visiting father (Hong).  To further add to stress levels, an overeager auditor (Curtis) is putting her business through a rigorous tax audit.

All these issues are brushed aside when Evelyn is contacted by an alternate version of her husband and told she is the key to saving the multiverse from destruction.  She travels to other worlds, collects skills from “herself”, and uses them to defeat villainous beings.  Oh, there’s also raccoons, bagels and phallic trophies.  No review can fully encapsulate the many quirks and surprises!

Everything Everywhere All at Once sprung from the mind of the two writer-directors, Dan Kwan and Daniel Scheinert, who identify themselves collectively as “Daniels”.  It’s one thing to come up with great ideas in pre-production but to execute them as precisely as they’ve done here… it’s an incredible achievement.  The continual movement between worlds is beautifully illustrated thanks to the perfect blend of cinematography, editing and visual effects.

The film also provides the “role of a lifetime” to its star, Michelle Yeoh (Crouching Tiger, Hidden Dragon, Crazy Rich Asians).  She gets the chance to play a forever changing character who niftily demonstrates almost every human emotion.  She also creates someone worth caring deeply about.  While much of the film is insane and bat-shit crazy (hot-dog fingers, anyone?), the touching finale offers heartfelt joy and significant life lessons.

We’re only 3 ½ months into 2022 but it’s safe to say Everything Everywhere All at Once is one of the year’s best and most original feature films.