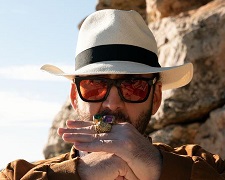 If you’re putting together a list of the best Nicolas Cage movies, a film which must be included is Adaptation.  Blending reality and fiction, it was the tale of a renowned screenwriter (played by Cage) struggling to adapt an acclaimed novel into a smart, classy feature.  Adding to his frustration was the fact his inexperienced twin brother (also Cage) had, with effortless ease, written the script for a moronic thriller which had Hollywood executives buzzing.

Directed by Spike Jonze (Being John Malkovich) and best described as a dark comedy, Adaptation highlighted the predictable, formula-driven nature of the film industry but, with deliberate irony, did so in an original, humorous, thought-provoking way.  The sensational dual performance of Cage earned him a deserved Academy Award nomination in 2002 (he hasn’t been nominated in the two decades since) and the film picked up four nods in total.

It’s hard not to think about Jonze’s film while watching The Unbearable Weight of Massive Talent as it features the same leading man and is pushing the same themes.  This time around, Cage is following in the footsteps of Larry David in Curb Your Enthusiasm and playing a warped, alternate version of himself.  In the opening scenes, we learn that his career is sagging, his bank balance is dwindling, and his family life is waning.  His self-absorbed nature isn’t helping things either.

In need of cash to pay a hefty hotel bill (where he’s been living for several months), Cage reluctantly accepts a $1 million offer to attend the birthday celebrations of a wealthy fan, Javi Gutierrez (Pascal), on the Spanish island of Mallorca.  It doesn’t take him long to warm to the situation.  Cage yearns for recognition and the adoring Javi is the perfect companion to stroke his inflated ego.

The film then heads down a path where Cage, who hasn’t landed a role in a major action blockbuster for many years, now finds his own life full of “actual” action.  It turns out Javi is a criminal arms dealer (explaining his wealth) and the CIA want to use Cage as an undercover agent to gather intelligence.  This includes scouting Javi’s mansion and identifying the location of the kidnapped daughter of the Catalonian President.

I like the idea of this movie but the execution isn’t strong enough.  If you ignore the fact Nicolas Cage plays himself, it reveals itself to be a goofy, over-the-top, cliché-laden comedy.  The CIA agents are incompetent, the family scenes are contrived, and the redemptive arc of the “hero” makes little sense.  Was this an intentional decision to highlight the general lack of originality in today’s big blockbusters?  If so, it’s not exactly a big revelation.

You’d hope the inclusion of Nicolas Cage might add a fun layer but that’s not really the case.  It’s a one-note idea stretched out over 107 minutes.  Fans of the Academy Award winning actor might lap it up but I quickly tired of the continual references to past movies (they add little) and his character’s general ignorance.  Instead of coming up with fresh, surprising jokes to make this film memorable and meme-worthy, it is rehashing stuff referred to a million times on social media over the past year (such as a reference to Paddington 2).

I’m a fan of the title but there’s not much else to get excited about with The Unbearable Weight of Massive Talent.  When all the best material is used in the trailer, it’s rarely a good sign.  If you wanted to see a film about a forlorn celebrity whisked off to a remote island on a life-changing mission… The Lost City is also in cinemas and offers more plot and more laughs.