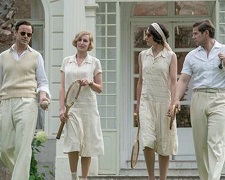 Movies based off long-running, successful television shows, while retaining the same cast, generally tend to be one-offs.  With the first Downton Abbey movie reeling in close to $200 million USD at the global box-office, it has the potential to go much further and become a longer running film franchise.  Downton Abbey: A New Era reunites the much-loved characters in a new adventure pitched at existing fans and those who enjoy a fun period piece.

There are countless subplots but if trying to summarise quickly, the movie is centred around two key narratives.  The mansion’s roof is in desperate need of repair and so the residents of Downton Abbey have, for a sizeable fee, agreed to let a movie studio make a film within its beautiful walls.  It becomes the “film within a film” and features a light-hearted storyline reminiscent of the Oscar winning The Artist.  This was a time when silent flicks were on the out and “talkies” were on the in.

The second plotline takes us to Toulon in Southern France.  Following the death of an ex-suitor, The Countess of Grantham (Smith) has been gifted a beautiful villa (wish this sort of stuff happened to me) which the household can use as a summer holiday home.  Led by the Countess’s son, the Earl of Grantham (Bonneville), a select group has travelled to France to inspect the property and find out what’s truly behind this lavish, unexpected bequest.

There’s a lot going on here.  Television affords the luxury of developing subplots across multiple episodes but by using the medium of cinema, it’s a battle to give everyone a deserved amount of screentime and squeeze it all into a two-hour run time.  I’ll admit the editing feels a little choppy with the continual back-and-forth between Yorkshire and Toulon.  New characters, such as the previous owners of the French villa, are feebly developed and are just rehashing the same material in each scene.

The best part of Downton Abbey: A New Era is the in-house movie shoot and the excitement it generates, particularly amongst the starstruck staff living downstairs.  It affords an opportunity for cute humour – highlighted by a scene where the servants go through a role-reversing transformation when used as extras in the film’s big climax.  Laura Haddock is the pick of the new cast members with her “fish out of water” performance as a snobby yet vulnerable actress who is terrified by the arrival of “talkies”.

Of the regulars, Maggie Smith again gets the best of the one-liners and solidifies her reputation as the series’ heart and soul.  She’s not a big fan of the movie being shot at Downton (“I’d rather eat pebbles”) and her cranky interactions with fellow members about the subject create much needed humour.  It helps compensate for the lack of tension.  Everyone is too polite and civil!

Shot in the middle of the COVID-19 pandemic (the lack of projects made it easy to bring the cast back together), Downton Abbey: A New Era isn’t breaking new ground but it’s still easy to watch.