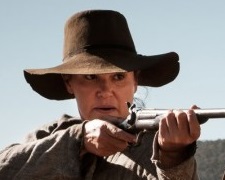 There’s no questioning the knowledge and passion that writer-director-star Leah Purcell has for this material.  Drawing from the famous 1892 Henry Lawson short story (it’s just over 3,000 words), Purcell added significantly more detail and crafted a highly acclaimed play which premiered at Sydney’s Belvoir St Theatre in 2016.  Three years later, she expanded on the material and published a 288-page novel.  Now, she’s turned it into a feature film which is being released in cinemas across the country.

Set in the Australian outback in the late 19th Century, the story is centred on Molly Johnson (Purcell), a pregnant mother who is tending to her husband’s property in the Snowy Mountain while he is away for several months droving sheep.  It’s a tough, harsh world and Molly is a product of that.  She’s grown accustomed to her husband’s absence and, operating with very little money, she grittily raises her four kids in a tiny timber shack.

I wouldn’t say Molly is comfortable with her life but she enjoys the solitude of her remote home as opposed to interacting with drunken, not-so-welcoming locals in the nearby town of Everton.  Unfortunately, she’s about to be drawn into problems not of her making.  An Indigenous man has been accused of murder and when he arrives on Molly’s doorstep looking for assistance, she must make choices which could impact the future of her family.

There are other storylines at play and the most notable is the connection between an English couple (Reid and De Gouw) who recently emigrated to Australia.  He’s a police officer trying to bring “law and order” to the corruption-laden town while she’s a progressive writer trying to shape community views on issues like women’s rights.  I wasn’t overly convinced by these smaller subplots and I think they lack nuance and conviction.

It’s easy to forget the film’s minor weaknesses when you see the tour de force lead performance from Leah Purcell.  She pours so much into the title character and, as an audience member, you understand every emotion she experiences and the rationale behind every tricky decision she makes.  It’s one of Purcell’s finest roles and hopefully she’ll receive acknowledgement later in the year at the AACTA Awards.

Chosen to open both the Brisbane and Melbourne international film festivals in 2021, it’s taken a long time for The Drover’s Wife to receive a national cinema release but, if you’re one who enjoys interesting Australian cinema, you’ll find the wait is worth it.