Review: Doctor Strange in the Multiverse of Madness 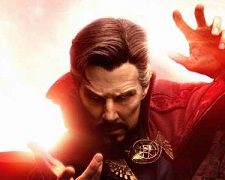 I didn’t know what a “multiverse” was six months ago but having seen Spider-Man: No Way Home, Everything Everywhere All at Once, and now Doctor Strange in the Multiverse of Madness, I realise it’s a fast-growing concept to add freshness to the science fiction genre.  Characters can travel to alternate universes and meet different versions of themselves and loved ones.

With the Marvel Cinematic Universe introducing the idea in the most recent Spider-Man flick, writer Michael Waldron (Loki) ups the stakes here.  Our beloved Doctor Strange (Cumberbatch), described as “a sorcerer with the power of God”, meets a young woman who has the rare ability to open portals and allow travel between other universes (she’s visited almost 100 of them).

As you can imagine, it’s an incredibly powerful gift which villainous folk would like to get their hands on.  It also raises a philosophical, moralistic question for audiences to ponder.  If you knew of another universe where you were much happier, would you want to go and stay there?  Doctor Strange must give it thought himself.  Given he “lost” the love of his life (McAdams) in his regular verse, is there an alternate reality where they ended up together and lived happily ever after?

There are glimpses of promise here but on the whole, it’s an underwhelming effort from Marvel Studios.  Not helping matters is that Everything Everywhere All at Once, still in cinemas and doing nicely at the box-office, offers so much more in blending outlandish science fiction with genuine human emotion.  Thanks to its important opening act, before the chaos begins, you grow an attachment to its characters and understand their internal struggles.

That’s not the case with Doctor Strange in the Multiverse of Madness.  Significant chunks of time are devoted to action where people are conveniently using magic spells (music notes???) and shooting weird colourful stuff out of their hands.  The problem is that you don’t really care about anyone.  Without giving too much away, they try to offer depth to the remorseless villain by saying they’re driven by “family” but it’s a weak, superficial justification for someone who just a simplistic, one-dimensional baddie.

The most interesting character in the film is America Chavez (Gomez), the woman with multiverse-travelling skills, but only a fleeting amount of time is spent delving into talents and her trauma-laden upbringing.  The movie needed more of America and less of the clumsy romance stuff (the interactions between Cumberbatch and McAdams are so dull).  Even the cameos (adding little) and post-credit sequences feel sub-par by the franchise’s normal standards.

Offering little in the way of laughs or suspense, and serving up tired lines like “get the hell out of my universe”, Doctor Strange in the Multiverse of Madness is more over-the-top spectacle than it is heart.