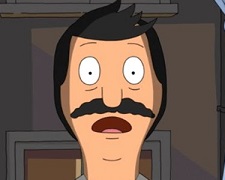 I wasn’t sure the fan base was wide enough to justify a big screen movie (ratings have been iffy in recent years) but, as someone who’s watched and enjoyed many episodes of the television show, I’m happy to see The Bob’s Burgers Movie.  For those new to the material, the show debuted in January 2011 and is still on the air today with 238 episodes produced across 12 seasons.

For as long as we’ve known the characters, the pessimistic Bob (Benjamin) and the optimistic Linda (Roberts) have run a small, simple burger store which is continually on the brink of financial collapse.  The film opens with an anxious Bob trying to find the money to meet lease payments on the store’s cooking equipment.  He’s got seven days or else the property will be repossessed by the inflexible bank and his business closed.

Bob and Linda have three chatty, problematic children who usually go an assortment of adventures away from the burger restaurant.  This time around, they’re trying to trump the incompetent police and solve a heinous crime.  The family’s wealthy landlord, Calvin Fischoeder (Kline), has been accused of murdering a beloved carny and so the trio, led by 9-year-old Louise (Schaal), try to put the pieces together to see who’s responsible.

The film moves at a frenetic pace and it’s hard at times to keep up with all the jokes.  The best material goes to the middle child, Gene (Mirman), who slips in plenty of adult humour to spice things up.  He’s funny even when he’s not on screen!  Many of his great one-liners can be heard in the background while other family members are front and centre.

Aside from a few musical numbers, there’s nothing overly adventurous about the film’s script.  It’s just a longer version of the television show.  Lead characters do what we expect of them (e.g. Bob is always stressed) and regular supporting players pop in and out.  The broader storyline isn’t complex and in trying to be a fun, interesting murder-mystery, it falls short.  I’d argue The Simpsons (Who Shot Mr. Burns? in 1995) and Family Guy (And Then There Were Fewer in 2010) did it much better.

Aimed squarely at existing fans, The Bob’s Burgers Movie is a serviceable animated feature that would be considered “middle of the pack” if ranked on a list of the television episodes.