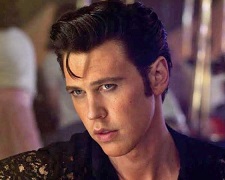 When it comes to biopics, condensing the entire life of a renowned individual into a two-and-a-bit hour movie isn’t my preferred approach.  I lean towards a narrower focus on a particular moment in their career, such as what director Stephen Frears did with The Queen, to provide a deeper insight into who they are/were as a person.  If I want to know more about them, I can jump on the internet and do some reading to fill in the gaps.

This personal preference explains why I was lukewarm about the opening hour of Elvis.  In trying to provide a quick overview of Elvis Presley’s upbringing and rise to stardom, director Baz Luhrmann (The Great Gatsby, Romeo + Juliet) hits us with a torrent of sound and visuals (with an emphasis on reaction shots).  The editing is so fast paced that there’s barely any time for characters to share meaningful conversations.  It’s like skim reading a book – you get a high-level feel for the content but not a full comprehension.

Thankfully, the tempo is slowed in the second half and we finally get an appreciation of Presley’s talent along with his strengths and weaknesses.  Central to film’s allure is the lead performance of Austin Butler – an American actor better known for his television work (The Carrie Diaries, The Shannara Chronicles) before now.  He does a wonderful job capturing the soul of Elvis Presley and you will care about the character as his life unravels in the later stages.  Butler was recommended for the role by Denzel Washington (they worked together on Broadway in 2018) and it’s easy to see why.

With so much story to tell, it’s inevitable that a few supporting players will fall by the wayside.  Elvis’s wife, Priscilla (DeJone), and his father, Vernon (Roxburgh), come across as simple and one-dimensional.  Presley’s music was shaped by that of many gifted black artists and again, it’s fleetingly touched upon in only a handful of scenes.

The four-person writing team have chosen Elvis’s long-time manager, Colonel Tom Parker (Hanks), to be the film’s dominant focus.  He serves as the story’s villain in that he was a gambling addict who took a farcically high commission from his client’s revenues.  On top of that, he was an expert manipulator who deliberately sabotaged Elvis’s relationships with friends and family.  It’s rare to see Tom Hanks (Forrest Gump) step into the shoes of such a loathsome, whiny character but he’s solid as the sweet-talking Colonel Parker.  That said, I’ve have cut the 1990s scenes as they add little.

I spoke with actor Kelvin Harrison Jr several months ago (he plays B.B. King in the movie) who succinctly summed up the filmmaking experience – “Baz is an event in one person.”  It’s an apt way of describing this movie.  Shot here in Australia on the Gold Coast, Luhrmann draws on his trademark style and creates something loud, colourful, bold and “in your face”.  It takes time to warm up but Elvis provides audiences with a celebratory tribute to an iconic musician.  At the very least, see it for Austin Butler's performance!