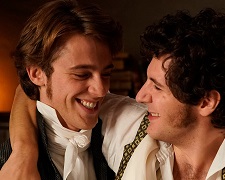 Much is made these days of partisan news outlets and the way they “shape” people’s views but, as we learn in the new French drama Lost Illusions, it’s far from being a new problem.  The film takes us back to the early 19th Century when the newspaper business was booming in Paris.  Production costs were falling rapidly (cheaper paper, high-speed presses) and sales were on the upswing – the result of a more affluent society who were hungry for news, opinions, and gossip.

Based on the novel by Honoré de Balzac, the film’s fictious protagonist is Lucien de Rubempré (Voisin), a young, budding writer living in Paris who yearns to be a successful author but can’t find a publisher with enough faith to back him.  To make ends meet in the interim, he accepts a job at a small newspaper where, under the tutelage of Étienne Lousteau (Lacoste), his eyes are opened to a world he never knew existed.

Étienne doesn’t mince his words or hide his bias.  On Lucien’s first day, he is told the singular focus of everyone is to “enrich shareholders”.  Morals and ethics are irrelevant.  It’s all about selling papers and boosting revenue.  Lucien quickly finds his feet and is soon writing reviews for books and theatrical productions.  The “catch” is that his actual opinion is irrelevant.  If authors/producers offer decent bribes, he’ll author glowing, favourable reviews.  If not, his critiques will contain harsh words and sharp barbs – a death sentence to the artists’ work.

Directed by Xavier Giannulli (Marguerite), Lost Illusions provides an insightful look into a fascinating time.  It’s captivating from start to finish!  It's also easy to see why it won seven César Awards (the French equivalent of the Oscars) including best film and best adapted screenplay.  It’s filled with rich, interesting characters playing power games and trying to outmanoeuvre their adversaries.  Just like a game of Snakes and Ladders, there’s plenty of rises and plenty of falls.

25-year-old Benjamin Voisin (Summer of 85) is outstanding in the lead role – a performance that relies as much on his appearance and facial expressions as it does on dialogue.  The costume and make-up teams do a stellar job in helping illustrate Lucien’s everchanging disposition with his external “look” mirroring his internal mindset.  That’s not to say there aren’t some terrific conversations.  The exchanges between Lucien and Étienne are riveting and the same can be said of fleeting scenes involving a big-wig publisher (a great cameo from Gérard Depardieu).

Selected to open the recent French Film Festival here in Australia, Lost Illusions is a must-see flick and another great addition to the canon of great French cinema.