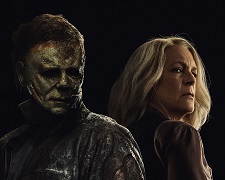 Just like Michael Myers himself, the Halloween franchise refuses to die.  It began in 1978 with a low-budget slasher film directed by John Carpenter and now here we are, 44 years later, with a thirteenth movie in the series.  The title suggests it’s the final instalment but when it comes to Hollywood, nothing can be certain when there’s money to be made.

The most recent film, Halloween Kills, was complete rubbish and so it’s great to see the four-person writing team take more chances this time around.  Maybe it really is the last movie???  The prologue introduces us to a new character – 21-year-old Corey Cunningham (Campbell) is from the infamous town of Haddonfield, Illinois but he’s gone through a life-altering tragedy unrelated to Michael Myers.  He was babysitting for a family in the neighbourhood when the child fell from the top of the staircase and was killed.

The event was an accident and several years have passed but it’s been impossible for Corey to shake its effects.  There’s the internal guilt and the lingering question about whether he could have done something differently to prevent what took place.  There’s also the uneasy looks and inferred judgement from folks in the town as Corey goes about his usual day.  You get a sense he should have left town long ago and sought a fresh start.

So… what does any of this have to do with the earlier Halloween movies?  Well, not much and that’s part of the film’s allure.  It’s a different tale driven by more realistic, common human emotions as opposed to simple blood and gore.  To link it together with the returning characters, Corey strikes up a relationship with Allyson (Matichak) and the pair spend an increasing amount of time together.  Her memoir-writing grandmother, Laurie (Curtis), is initially accepting of their connection but after a series of strange events, she starts to worry about Corey’s psychological stability.

I’m reminded of the sport of gymnastics where an athlete’s score is a combination of degree of difficulty and execution.  Using that same methodology, director David Gordon Green (who made the last two movies) gets a winning grade here because of the high difficulty level.  There are a few stumbles along the way – stiff romantic dialogue, convenient timings, unexplained supernatural gimmicks – but he’s taken enough chances in terms of tone and plot to significantly differentiate it from others in the franchise.  As we’ve seen in the United States with school shootings, this film taps into the way grief can overwhelm a small community and cast a dark, depressive shadow that lasts for years, if not decades.

Moving away from the gritty drama, Halloween Ends still offers up gruesome horror at opportune moments and while Michael Myers is relegated to supporting status, he does have a key part of play.  Also, to cornily use another gymnastics term, Green sticks the landing.  The finale is a good ‘un!