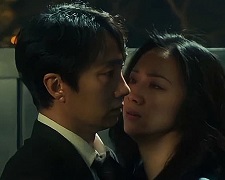 The dead body of a local 60-year-old man is found at the bottom of a mountain range in South Korea.  It appears to be an unfortunate rock-climbing mishap and in the eyes of many, a costly, time-consuming investigation would be unwarranted.  Experienced detective Seo-rae (Wei) thinks otherwise however.  He and his brash partner (Kyung-pyo) focus their attention on the man’s younger, Chinese-born wife, Hae-jun (Hae-il).  The physical abuse she recently received from her late husband creates a plausible motive but does she have the capability of committing murder and if so, how did she orchestrate it to look like an innocuous accident?

Decision to Leave then goes down an unusual path – the detective and the suspect fall in love.  It sounds like an idea borrowed from a corny, Hollywood thriller trying to offer something for all audiences but director Park Chan-wook (Oldboy, Snowpiercer) handles it with precision.  The development of their relationship will keep audiences on their toes.  Is their love mutual and genuine?  Or is one of them (perhaps both) trying to “play” the other in pursuit of a separate agenda?  It’s easy to see why comparisons have been made to movies such as Vertigo and Basic Instinct.

It’s a terrific screenplay filled with distinctive moments.  One of my favourite scenes sees Seo-rae interrogate Hae-jun in a police station interview room as colleagues look on through a one-way mirror.  The suspect is entitled to basic food but Seo-rae goes above and beyond by ordering an expensive sushi set for them to share as the interview takes place.  It’s a moment that offers intriguing drama (articulating the unusual nature to their growing connection) while also showcasing the unexpected comedic layer created by supporting characters (the reaction of Seo-rae’s partner which was set up by an earlier scene).

Park Chan-wook enhances the material further with his skilled direction.  The cinematography of Kim Ji-yong is the most obvious stand-out and I lost count of how many times I said to myself – “that’s such a great shot!”  The emotional climax, making great use of fading light and creative angles (loved the high shot), exemplifies Ji-yong’s impressive eye.  This is as much a visual feast as it is a romantic mystery.  The editing talents of Kim Sang-bum also deserve praise as he keeps the film moving at a fast pace with sequences which blend current day (the investigation) with the past (the crime).

Requiring your full attention for its 138-minute running time, Decision to Leave is yet another winner to emanate from South Korea.  It won best director at this year’s Cannes Film Festival and is South Korea’s official entry in the best international feature category at next year’s Academy Awards.  It’s the kind of movie you’re likely to remember long after seeing it.