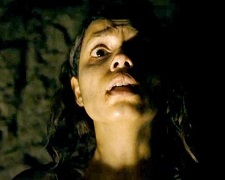 Written and directed by Zach Cregger, Barbarian is a terrific horror-thriller which creatively finds a way to cover both of the aforementioned alternatives.  It opens with an event which could happen to any of us.  A woman (Campbell), travelling to Detroit for a job interview, arrives at her single-bedroom Airbnb and finds someone else (Skarsgård) already there.  It seems the owner stuffed up and the place was double booked.  Exploring options, she calls a nearby hotel but it’s fully booked given a large medical convention is taking place in the city.

I won’t say too much more because Barbarian is a surprising, continually shifting tale that shouldn’t be spoiled.  You’ll be surprised by both the storyline and the direction.  As an example, there’s a jarring moment half-way through where Cregger turns the tension up to the highest dial before unexpectedly pressing the reset button (you’ll know it when you see it).  The heavy, sinister music score from composer Anna Drubich and the dimly lit, anxiety-building shots from cinematographer Zach Kuperstein add to the film’s impact.

Made for just $4 million USD, Barbarian has been one of this year’s success stories having spent 6 weeks inside the top 10 at the U.S. box-office with almost $40 million USD in ticket sales.  It’s not always the case but it’s nice when positive word of mouth spreads and original, deserving movies find their intended audience.  Hopefully we see the same here in Australia.