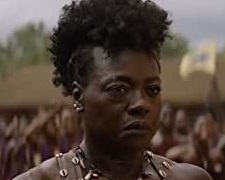 As we’ve seen again and again, cinema is medium which allows us to illuminate events from the past and help ensure they remain in people’s minds for decades to come.  In addition to being a successful Hollywood actress, Maria Bello (The Cooler, A History of Violence) is a highly regarded women’s rights activist who has championed important causes around the world which a particular focus on the Caribbean country of Haiti.

Bello has also spent a significant chunk of her life in Africa and whilst visiting Benin, the nation sandwiched in between Togo and Nigeria, she learned about the Agojie.  They were an all-female army who went into battle and protected their people under the direction of the king.  The regiment began in the 17th Century and continued for more than two centuries.  Stories about these women have been passed down through generations and Bello rightly thought they would make for a great Braveheart-style movie.

The Woman King is the end result and, despite early scepticism of studios, we now know there is an audience for this.  It opened in the #1 spot on the U.S. box-office chart and has earned more than $60 million USD over its first five weeks.  Dana Stephens (City of Angels) helped transform Bello’s story into a screenplay and Gina Prince-Bythewood (Love & Basketball) took the reigns as director.  Fitting with the subject matter, there’s a strong female presence behind the camera in terms of the cinematography, editing, casting and costume design.

The film transports us to Dahomey (the former name of Benin) in the year 1823 where its citizens are at war with the powerful Oyo Empire who are accumulating wealth by enslaving African people, putting them on boats, and selling them to European traders.  The Agojie warriors, who have all taken a vow of celibacy to fully dedicate themselves to the cause, are going through an intense training regime as they prepare to defend their city against an upcoming Oyo attack.

There’s a strong cast of supporting players but two characters are front and centre throughout.  The first is the aging General Nanisca, fiercely played by Oscar-winner Viola Davis (Fences), who leads the army with a sense of tough love.  There are times when she provides strict discipline (orders must be followed) and other times when she offers comfort and support.  Davis creates an appealing protagonist and it’s soon evident her tough disposition hides a insecurities/secrets which won’t easily go away.  Also of interest is the tactful relationship she shares with the male king (Boyega).

The second key character is Nawi, played by up-and-coming star Thuso Mbedu (The Underground Railroad), who plays the Agojie’s latest recruit.  She’s a headstrong young woman who rubs several warriors up the wrong way but, thanks to a little guidance, her naïve passion is transformed from a liability into an asset.  She will have an important role to play in defeating the villainous Oyo.

I don’t think the battle scenes are well directed (too much editing, odd camera angles) but aside, The Woman King is a strong action drama.  It’s normally tricky with this many subplots (everyone has a worthy backstory) but Stevens and Prince-Bythewood weave it all together into something coherent and engaging.  You understand what motivates the characters, you care about their fate, and your eyes are opened to a seldom publicised part of African history.