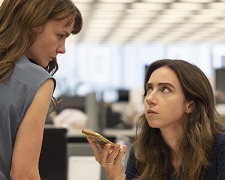 Six years ago, Harvey Weinstein was one of the most powerful, influential producers in Hollywood.  The media company Vocativ analysed the acceptance speech of every Oscar winner (achieved on the Academy’s website) and found Weinstein was the second most thanked individual in history – just behind Steven Spielberg and just ahead of James Cameron.  He took home an Academy Award of his own in 1999 when Shakespeare in Love won best picture in a major upset over Saving Private Ryan.

Today, Weinstein can be found in prison.  He was convicted of rape and sexual assault at a 2020 trial in New York City and sentenced to 23 years behind bars.  A second criminal trial is currently underway in Los Angeles where he faces a further 11 charges.  When the many allegations against Weinstein became widely known in 2017, it kickstarted the #MeToo movement where people shared experiences of sexual abuse and harassment on social media.

She Said is reminiscent of the Oscar winning Spotlight in that instead of focusing solely on the perpetrators and victims, it’s largely about the newspaper who brought the story to the public’s attention.  This film is centred on two journalists from The New York Times, Jodi Kantor (Kazan) and Megan Twohey (Mulligan), who spent close to six months conducting their investigation and building a fact-heavy case against Weinstein which couldn’t be disputed.

The film’s best scenes involving Kantor and Twohey speaking one-on-one with abused women who, some willingly and some nervously, discuss their terrifying experiences.  Perhaps the most eye-opening detail for audiences will be the use of non-disclosure agreements.  Weinstein was able to use his wealth as a weapon – coercing women into accepting substantial cash settlements in return for their silence.

It’s the reason why many people interviewed by Kantor and Twohey refused to go “on the record” despite having a worthy story to tell.  It also highlights just how many within the industry knew about Weinstein given that lawyers, accountants, and board members all needed to be involved before the non-disclosure agreements could be signed off.  It became the dirty secret that everyone spoke about privately… but no one wanted to risk their jobs by speaking about publicly.

Carey Mulligan (An Education) and Zoe Kazan (The Big Sick) are both very good in their respective roles.  They help take us inside the frustrating nature of investigative journalism and the doubts that cloud your judgement while waiting for a “big break” that may never come.  As if channelling Liev Schreiber’s performance as the monotone boss in Spotlight, Patricia Clarkson (Pieces of April) is also terrific as the high-ranking New York Times editor who provides her team with timely advice and comfort.

It’s a touch over-scripted in places but it’s a minor weakness.  She Said is an interesting and important film.