Review: Avatar: The Way of Water 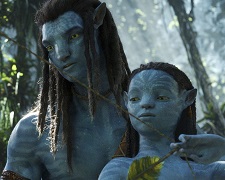 In terms of filmmaking, there is very little, if anything, that James Cameron has left to prove.  He will go down in history as one of the most successful directors of all time.  His early years featured classics such as Aliens, The Abyss, and the first two Terminator movies.  In 1997, Titanic won a record 11 Academy Awards (the record still stands) and became the highest grossing movie of all time in the United States.  That benchmark stood for 12 years until Cameron’s very next film, Avatar, bettered Titanic’s domestic gross in just 47 days and would go on to make a phenomenal $2.75 billion at the global box-office.

Having waited over a decade, Cameron finally takes audiences back to the world of Pandora for another adventure involving our beloved blue characters.  It’s epic in terms of cost ($350-$400 million), epic in terms of duration (193 minutes), and epic in terms of technological advancement.  The film has been shot to make the most of 3D cinema (which we haven’t seen much of in recent years) and certain action scenes utilise the smoother, but seldom used, 48 frames per second rate as opposed to the traditional 24.

Avatar: The Way of Water provides an incredible spectacle.  The visuals make you think that every other action flick of the past decade was made in the 1950s.  It’s head-scratching that Cameron can create such a stunningly beautiful world with bright, clear, easy-to-follow battles (the sound effects are great too) while all other directors keep churning out the same dark, grainy, repetitive-looking stuff.  Maybe it’s a budget thing?  Maybe Cameron is simply in a league of his own?

I’m not as enthusiastic when it comes to narrative.  I was never bored in Avatar: The Way of Water but the five-person writing team take few chances and go down a familiar, well-worth path.  I feel like I’ve seen this type of action story 10,000 times now – one where people make reckless decisions and put their lives in danger because nothing is more important than “family” and keeping them safe.  Given the 68-year-old Cameron has three more sequels planned, it could give The Fast and The Furious franchise a run for its money in who pushes the family theme hardest.

To provide a quick synopsis, the Earth is still dying and a small group of well-armed human soldiers are hoping to “pacify” the Na’vi locals on Pandora and take over the planet as their own.  Their latest scheme is to adopt Na’vi avatars, sneak through local defences, and take down Jake Sully (Worthington), the heroic human-turned-Na’vi who has become a thorn in their side.  In addition to Jake, the “good guy” side includes his partner (Saldaña), their four kids, a new clan of people, a teenager named “Spider” (Champion), and a bunch of super-smart fish.  Some subplots are resolved whilst others will carry over into future movies.

Considering all other studios have run for the hills and are putting up nothing against it (last week’s box-office in the U.S. was the worst in 11 months), Avatar: The Way of Water will be one of this year’s biggest hits.  See it on the biggest screen you can find.  It’s review-proof.