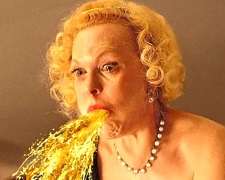 Winning one Palme d’or (the top prize at the Cannes Film Festival) is a career-defining achievement but to win two is something special.  It’s a position that 48-year-old Swedish filmmaker Ruben Östlund (Force Majeure) now finds himself in.  He won the award in 2017 for his offbeat dark comedy The Square and he’s followed it up five years later with his next film, Triangle of Sadness.  It’s worth noting that, coincidence or not, both titles contain the name of a shape.

This latest effort is split into three chapters which have overlapping characters but different settings.  It opens by introducing us to two young, good-looking models (Dickinson and Dean) who argue about etiquette when paying the bill at a restaurant.  The middle act takes place on a $250 million luxury yacht where the hard-working staff and alcoholic captain (Harrelson) tend to the needs of the uber-wealthy guests.  The climax is reminiscent of William Golding’s Lord of the Flies and sees a group of people fending for surviving after becoming stuck on a deserted island.

It’s heavy handed in places but Triangle of Sadness can be admired for many reasons.  It’s a great film to discuss with friends as you dissect the themes being explored in relation to class structures within society.  As articulated by Östlund in interviews, it also has something to say about “good looks” being used as currency.  Whether we like it or not, we live in a world where beauty can be just as important, if not more so, than brains as people climb corporate and social ladders.

For those who don’t want to delve deeply into messages, Triangle of Sadness can still be enjoyed as an outlandish spectacle.  The lengthy scene where the two models disagree about who should pay for dinner is reminiscent of a Curb Your Enthusiasm skit.  A sequence where cruise ship guests become violently ill after eating a lavish dinner in the middle of a storm could be borrowed from low-brow comedy given the abundance of shit and vomit.  The open-endedness to several subplots in the film’s finale taps into a director’s fun in teasing audiences (such as Christopher Nolan in Inception).

Of the cast, Philippines-born Dolly de Leon is getting the most awards season attention thus far for her hilarious performance as a cleaning lady who comes to prominence in the final act.  She’s terrific but so too is the broader ensemble.  Some actors only appear in a handful of scenes by they leave an impression – a great example being Swedish actress Mia Benson as a deluded guest who demands the yacht’s non-existent sails be cleaned.  There’s a tinge of sadness to the film’s release however given the unexpected death of 32-year-old star Charlbi Dean (who plays Yaya) in August.

Ruben Östlund could never be accused of creating dull movies and if looking for something wild and eyebrow-raising, Triangle of Sadness fits the bill.