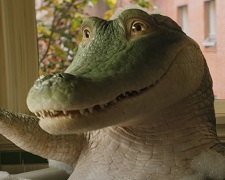 It’s not going to change the world but as a film trying to offer laughs, entertainment, and big-hearted messages for younger audiences, Lyle, Lyle, Crocodile fulfils its mission.  Adults won’t mind it either.  The source material is a 48-page children’s picture book authored by American Bernard Waber and first published in 1965.  I haven’t read it myself (must have missed it in kindergarten) but it’s easy to see the appeal given it’s centred on a cute crocodile who knows how to sing.

I’m reminded of an animated feature we saw earlier in the year, The Bad Guys, in that it reminds us not to “judge a book by its cover”.  The instinctive reaction is to run away from a crocodile (and several characters do that in this movie) but as we soon learn, Lyle is a shy, clumsy, sensitive creature who we shouldn’t fear.  The first member of the Primm family to realise this is Josh (Fegley), a young boy who discovers the crocodile hiding in the attic of a New York City townhouse recently rented by his two busy parents (Wu and McNairy).

The singing Lyle (voiced by Shawn Mendes) becomes the catalyst for good things.  The introverted Josh is struggling with a new school and a new city but, thanks to Lyle’s playful antics, he “comes out of his shell” and develops confidence and independence.  It’s not long before Josh’s parents learn about Lyle (it’s hard to hide a crocodile) and, somewhat unexpectedly, it brings the family closer together and more receptive to overdue changes (like the dinner menu).

Brought to the screen by the directing team of Will Speck and Josh Gordon (Blades of Glory, Office Christmas Party), Lyle, Lyle, Crocodile moves at a quick pace and doesn’t get bogged down with superfluous subplots.  A great example is Lyle’s backstory which features a fun supporting performance from Javier Bardem (No Country For Old Men) who first finds a baby Lyle in an exotic animals store. Covering these details in a speedy introduction frees up more time for us to get to the film’s heart – the bond between Lyle and Josh.

13-year-old Winslow Fegley, the younger brother of Oakes Fegley (Pete’s Dragon, The War With Grandpa), is very good in a role that many children will relate to.  It’s nice to see a story that depicts anxiety (showing kids it’s something a lot of people go through) while showing there are ways to open up and deal with it.  These real-life themes are nicely balanced against the humorous absurdity of a singing crocodile living in New York City.

Released on Boxing Day alongside the equally likeable Puss in Boots: The Last Wish here in Australia, there’s no shortage of quality family offerings this holiday season.