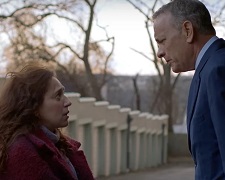 I enjoyed the Oscar-nominated 2015 Swedish film upon which this is based, but the first thought which came to mind on seeing A Man Called Otto was that of Clint Eastwood’s lead performance in the 2008 drama Gran Torino.  In that film, we saw Eastwood play an old, widowed, racist man who sits on his front porch, growls at people walking past, complains about anything, and generally hates the world.

Tom Hanks doesn’t bring the same level of racism to his character here but, for those who’ve seen Gran Torino, you should know the type of person I’m about to describe.  Otto (Hanks), to use the words of his neighbours, is a “nasty, bitter old man”.  We often talk about optimistic people who see the glass as half full and pessimistic people who see it as half empty.  Well, I’d say Otto is the kind of person who would pour the contents of the glass on the floor and then remark that it’s fully empty.

You name it… he finds it annoying.  He buys 5-feet of cheap rope at the hardware store and then complains because he’s charged for 6-feet (the price is by the yard).  He mumbles about folks in his street putting the wrong trash in recycling bins.  He even gets cranky at his own work retirement party – a moment you’d think he would enjoy.  He hasn’t always been this way and a series of flashbacks help fill in the gaps as to why he’s so miserable.  This includes the death of his wife six months earlier which added to his isolation and loneliness.

As you might expect, A Man Called Otto is intended to be a feel-good flick where other characters finally crack Otto’s tough veneer and discover that he’s actually a nice guy with a big heart.  The one who does this best is Marisol (Treviño) an extroverted, Mexican-born woman who has just moved into the neighbourhood with her family.  She doesn’t like taking “no” for an answer and is quick to impose herself in Otto’s life.

Through his film production company, Tom Hanks snapped up the rights for an English language remake of the Swedish original (A Man Called Ove) and while I acknowledge its potential, I’m not convinced Hanks was the right fit for the lead role.  Perhaps he’s a victim of his own success but after decades of playing nice guys, I didn’t fully buy into his character.  I’ve met my fair share of grizzly, annoying people and Otto’s persona is a one-dimensional “act” as opposed to something more genuine.

Other elements also feel less authentic when compared to the earlier movie.  The film can’t quite find the right balance between seriousness and humour when showing Otto’s repeated suicide attempts.  They’re awkward and don’t fit with the broader, family-friendly tone.  Key plot points also feel overplayed such as the reaction of onlookers as Otto rescue a man who falls off a train platform.

All of that said, there are moments, particularly in the second half, which do work and will leave audiences feeling warm and fuzzy.  The scenes involving Hanks and Mexican actress Mariana Treviño are the film’s best and, through their polar-opposite personalities, we are reminded of the importance of human connections and that it’s never too late to be making new friends.

A Man Called Otto is contrived but it will still win many people over.

You can read my chat with star Mariana Treviño by clicking here.