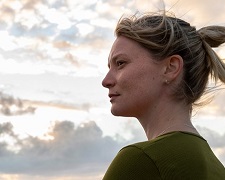 Released in 2014, Paper Planes was an attempt by director Robert Connolly to create more Australian movies for younger audiences as opposed to relying on the steady stream of content coming in from America.  As someone with two daughters of his own, Connolly wanted them to see stuff on the big screen which celebrated our own places, people, and culture.

Fresh off the incredible success of The Dry, which grossed over $20 million in this country, Connolly returns to family-themed content with Blueback.  It’s based on the 1997 novel by acclaimed author Tim Winton who was involved in adapting the source material into a screenplay.  Connolly made a few changes to better suit what he was looking for (making the protagonist a woman, not telling the story in chronological order) and the end result is a 100-minute feature targeted at a Christmas school holiday release.

There are two material subplots at play here.  The weaker one is about the environment and how important it is to protect.  I’ve got no qualms with the message, but it’s handled in a simplistic manner.  Taking the timeframe back about two decades, the teenage Abby (Fogg) befriends a blue groper while diving near her family seaside home and learns how important the ocean environment is.  She then teams up with her mum, Dora (Mitchell), to protect their coastal town from being overrun by villainous developers (led by Erik Thomson) looking to make a quick buck.  There’s some contrived stuff as illustrated in a scene where Abby speaks in front of local counsellors.

The second, current day subplot is the better one – the unescapable bond that exists between a parent and their child.  The elderly mum (Alexander) is suffering from the effects of a stroke and her now grown daughter (Wasikowska) has taken a break from her work as a marine biologist to help provide care.  Memories of the past come flooding back and Abby finds herself torn between the world she’s created for herself… and the ties that still connect her to the place where she grew up.

It’s hard not to get caught up in the emotion of the finale as Abby, deftly played by Mia Wasikowska (Alice in Wonderland), must selflessly balance up the needs of those around her in charting her own future.  Adding further star power are Radha Mitchell (Finding Neverland) as the headstrong version of the younger mum and Eric Bana (Chopper) as a chatty fisherman adding a dash of comedy.

Largely shot in Bremer Bay off the coast of Western Australia, Blueback can’t fully capture the essence of Tim Winton’s book but it’s not a bad effort.

You can read my chat with director Robert Connolly by clicking here.