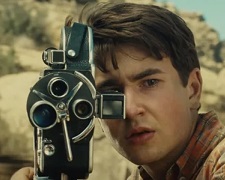 It was only two months ago that James Gray added his name to the growing list of the directors making semi-autobiographical dramas about their childhood (Armageddon Time).  Now, it’s the chance for the iconic Steven Spielberg to do the same.  There’s no doubting the 76-year-old has earned the opportunity.  The two-time Academy Award winner (Schindler’s List, Saving Private Ryan) is described on Wikipedia as “the most commercially successful director of all time.”

Set in the late 1950s / early 1960s, the film is centred around a shy 16-year-old named Sammy Fabelman, a character based on Spielberg and played by newcomer Gabriel LaBelle.  Not everything in Sammy’s world is great.  His parents (Williams and Dano) have an odd, rocky relationship, and he’s not the best at making friends at school.  There’s one thing that provides comfort though – movies.  Since the moment his parents took him to a cinema for the first time, Sammy has loved the craft.  He spends much of his pocket money buying film for his 8mm camera which he uses to create everything from intimate home movies to action-packed shorts.

The Fabelmans is clearly connecting with audiences given it won the lucrative People’s Choice Award at the 2022 Toronto Film Festival.  The last ten winners of that prize have gone on to earn Oscar nominations for best picture.  I’m in the minority by being slightly disappointed.  The fragmented, weird, skit-like nature to some scenes (e.g. chasing a tornado, buying a monkey) disrupt the emotional build up.

The supporting characters are largely one-note and underpowered.  The mum’s scatterbrained nature is tiring, the dad is a bore, and the Judd Hirsch heavy-handed “motivational” speech is shoved down our throats.  Also, what was up with the cliched high school bullies in the final act?  It’s as if the film wants to break away from the textbook everything-is-either-black-or-white formula but doesn’t have the guts to follow through.

Offsetting the questionable performances is 20-year-old Canadian Gabriel LaBelle who is brilliant in the lead role.  While the supporting players lack depth, LaBelle creates someone you will care about.  He provides the film’s strong core and that was enough to keep me engaged for the film’s lengthy 151-minute running time.  Sammy is an interesting, good-natured, nerdish kid who, through dogged determination, wins the respect of both family and friends.  Hard not to smile when thinking about that.

In one of the trailers for The Fabelmans, Steven Spielberg describes it as being different from all his other movies as it’s about direct memories as opposed to indirect metaphors.  The project may have meant a lot to him… but it didn’t mean as much to me.