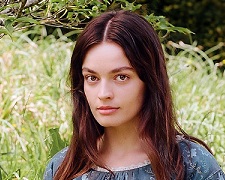 Actor Frances O’Connor (Mansfield Park) was a 15-year-old high school student from Western Australian when she first read Emily Brontë’s 1847 novel Wuthering Heights.  It became one of her favourite books and it spurred a greater interest in 19th century England and the lives of the three sisters, Charlotte, Anne and Emily, who would all become acclaimed authors.

Much is known about the Brontë family… but there are also significant gaps which historians have tried to fill over the past two centuries.  In making her debut as a writer-director, O’Connor doesn’t want this film described as a “biopic”.  It’s not intending to be a thoroughly researched, blow-by-blow retelling of Emily Brontë’s upbringing and achievements.  Rather, the focus is on showing who she was as a person.

Emma Mackey (Sex Education, Death on the Nile) steps in the shoes of the title character and portrays her as a private, introverted young woman who had “hot and cold” relationships with her siblings.  There are moments when she cheekily plays with her older brother (Whitehead) and there are moments when she turns against him in a fit of brutal, hate-filled rage.  Emily’s brilliant writing has stood the test of time but this film wants to put more of her personality on the public record.  It reminds us that great artists are no different from the rest of us.  They too are complex, emotional, flawed human beings.

The biggest subplot in the film, and the one most likely to cause concern with historians since it may not have happened, is a romance between Emily and an assistant priest named William Weightman (Jackson-Cohen).  It begins as a happy, passionate relationship but it becomes problematic over time given its secretive nature.  A few cliches are used (like the Romeo & Juliet trick of important letters not being passed on) but it’s designed to show Emily as a tortured soul who transformed heartbreak into literature.

The love story is a little tiresome, but Emily is better when exploring family dynamics – from the difficulties of pleasing a demanding father, to the unspoken rivalries that develop between brothers and sisters as they mature.  O’Connor enhances the material with above-average production values.  As an example, I was lured in by a simple but beautiful scene where a silent Emily listens intently to the sound of pouring rain while attending church.

While she’s been depicted on screen before, this is the first time Emily Brontë has received her “own” film.  Fans of her Wuthering Heights should find it interesting.