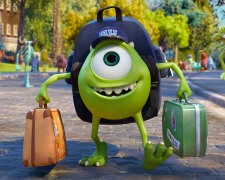 When you think of films like Finding Nemo, The Incredibles, Ratatouille, WALL-E and Up, it’s easy to see why Pixar are the leaders when it comes to family friendly animation. All of these films won the Academy Award for best animated feature and all of them came with a great story.

For the most part, Pixar have steered clear of sequels. Aside from the two follow ups to Toy Story and the not-so-great sequel to Cars, Pixar have focused on new material. It seems that mantra is changing. Perhaps they’re looking to boost the company’s bank account. Perhaps they’re simply bowing to public pressure. Whatever the reason, Monsters University is now in cinemas and a Finding Nemo sequel will be out in late 2015.

To quickly refresh your memory, Monsters, Inc. was set in a world where monsters of all shapes and sizes lived happily together. They had secret doorways that led into the “human world” but they were only used for one purpose. They’d sneak in at night, scare the bejesus out of small children and then capture their screams to be used as an energy source. For obvious reasons, only the scariest monsters were selected.

Monsters University serves as a prequel to the 2001 original. When it begins, our two protagonists, Mike (Crystal) and Sulley (Goodman), haven’t even met. It’s their first day at college and they’re both looking to impress their lecturer and fellow students within the high profile School of Scaring. They’re in for a quick reality check though. The university’s headmaster (Mirren) lays down the ground rules. If you’re not scary enough to pass the final exam, it’ll be time to start looking for another profession.

The film covers familiar ground in terms of its family orientated themes. Mike learns that you should never give up no matter how hard it seems. No one gives him a chance of making it because of his small size but he’s determined to study for hours every day and prove everyone wrong. On the flip side, Sulley learns that there are no free rides in life. He thinks he’ll cruise through the program because his father was a famous monster but he quickly realises it won’t be that easy.

There’s also a new group of characters from the not-so-popular fraternity Oozma Kappa. They’d given up on their chances to enter the School of Scaring but find themselves reinvigorated when they join Mike and Sulley in a school-wide scaring competition. Here we can tick off two other recognisable messages – (1) never write-off the underdog and (2) never undervalue the importance of friendship.

Please note that I’m not trying to be dismissive. I don’t expect Mike to give up on his dreams, develop a drug addiction and spend the rest of his life living in a ditch. That’s not how family movies work (although I wouldn’t mind seeing one take that kind of chance). What I’m trying to illustrate is that Monsters University is a safe film. Aside from one interesting twist at the start of the third act, things generally plan out as you’ll expect.

As was the case with Monsters, Inc., this is a film to be remembered for its great characters above anything else. It’s hard not to smile while listening to Billy Crystal and John Goodman argue back and forth. Their “buddy” relationship is reminiscent of that shared between Buzz and Woody in the Toy Story series. You’ll also notice the distinctive voices of Steve Buscemi and Helen Mirren who tap into their villainous personalities.

You could argue that Monsters University lacks the freshness of the original but it’s still nice to revisit this world and be charmed by these fun-loving monsters.