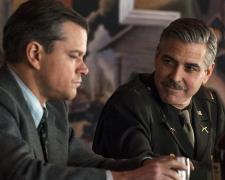 If nothing else, The Monuments Men offers an interesting titbit of information concerning World War II that many won’t be familiar with. In late 1944, as the war neared its conclusion, President Franklin D. Roosevelt gave the order for roughly 350 soldiers to head into Europe and to recover a plethora of famous art works and statutes that had been stolen by the Nazis for Adolf Hitler’s private museum.

It’s impossible to give all of these men and women credit in a single movie and so this screenplay, written by George Clooney and Grant Heslov, focuses its attention on just 7 soldiers. Frank (Clooney) leads the group and tries to stay abreast of their respective missions. It’s his goal to make sure Michelangelo’s David keeps standing and that da Vinci’s Mona Lisa keeps smiling.

Of his small team, James (Damon) heads to Paris to gather information from an art curator (Blanchett) who worked for the Nazis. Richard (Murray) and Preston (Balaban) go in search of an iconic altarpiece stolen from a Belgian church. Donald (Bonneville) travels to Bruges to protect a famous statue. Walter (Goodman) and Jean Claude (Dujardin) head to the frontline to follow some important leads.

The tone of this film is surprisingly light. I should have expected this given the cast includes the likes of Bill Murray, John Goodman, Jean Dujardin and Bob Balaban. Their adventures allow plenty of room for humour (not all jokes hit the mark) and there’s a sweet film score from composer Alexandre Desplat (Moonrise Kingdom, Philomena).

There are a few moments that offer something a little more dramatic, more thought provoking. These 7 guys encounter fellow soldiers who can’t quite get their head around the mission. Why would they want to risk their lives to save a few pieces of art? What should their families be told if they get caught in the line of fire and don’t make it back home?

While it’s an interesting tale, the screenplay does feel like it has too many characters and too many subplots. Not only are we seeing things from the perspective of the soldiers, we are also taken inside the world of the Nazis to see what’s behind their art-stealing ways. Oh yeah, and there are some Russians with their own motivations.

The film ends on a nice note (with George Clooney’s real-life father playing an older version of his character) but you can’t help but think The Monuments Men should have made more of its great starting material.