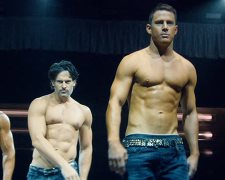 Channing Tatum rose to stardom as a 26-year-old with his breakout role in Step Up, released in August 2006.  There was nothing ground breaking about its premise.  He played a guy from the “wrong side of the tracks” who befriended a young dancer looking to forge a career with a professional dance company.  After a bit of friction, they hooked up – both on and off the dance floor – and developed a new, revolutionary routine to impress talent scouts at a major audition.

When you break it down, Magic Mike XXL isn’t all that different.  It’s a simple, entertaining, light-hearted romp that doesn’t require much thought.  You can just sit in your chair and let the strippers do all the work (metaphorically of course).

Magic Mike XXL kicks off three years where the last movie left off.  Mike has retired from the “male entertainer” industry and is trying to forge a more orthodox career.  He’s running a furniture making business but you wouldn’t really call it a success.  Sales are slow and he can’t even afford health cover for his only employee.  Adding to Mike’s woes is the fact that he recently came out of a long-term relationship (she was the one who broke it off).  The bottom line – things have been better.

Out of the blue, Mike gets a call from his old stripping team.  They’re passing through town on their way to an annual stripper convention (which apparently is a real thing) in Myrtle Beach.  Mike’s hand doesn’t take much twisting.  He agrees to join them for one last hurrah and in the process, they design a completely new show that will pleasure women like they’ve never been pleasured before.

Academy Award winning director Steven Soderbergh (Traffic) directed the original Magic Mike but he’s stepped aside here to allow his good friend Greg Jacobs to “strut his stuff”.  Jacobs has a good eye.  He makes great use of costumes, colour, lighting and camera angles to give the film a not-so-modern look.  When you throw in a few lengthy dialogue-driven sequences, you’ve got something reminiscent of Paul Thomas Anderson’s masterpiece, Boogie Nights.

Matthew McConaughey and Alex Pettyfer haven’t returned for this sequel but this has allowed the supporting players to get more screen time.  The dialogue doesn’t have that over-scripted Hollywood feel and credit belongs to the cast (there must have been great chemistry on set) and writer Reid Carolin (who also wrote the original).

The film’s female presence has been given a significant boost with the addition of Amber Heard (Friday Night Lights) as a sharp photographer who doesn’t want to sleep with Channing Tatum (gasp), Jada Pinkett Smith (The Nutty Professor) as a strong-willed club owner who knows what women want, and Andie MacDowell (Groundhog Day) as a scene-stealing mother who doesn’t mind telling people what’s on her mind (especially after a drink).  All make a great impression.

The film’s weak point are the stripping scenes themselves.  We keep seeing shots of adoring women screaming loudly and throwing $1 bills all over the place but I’m not sure how they maintain their excitement given the stripping routines are rushed and repetitive.  I won’t pretend to be an expert though.  My stripping days are long behind me.