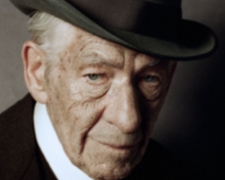 We watch our favourite action characters on the big screen, we’re accustomed to seeing them in their prime.  James Bond, Indiana Jones, Han Solo and Jason Bourne are almost always in peak physical condition.  The same can be said of comic book heroes like Batman, Iron Man and Thor (although some are helped with super powers).

Based on the novel by Mitch Cullin, Mr Holmes takes a different path.  You can forget about the sharp, agile Sherlock Holmes that Robert Downey Jr made famous in the 2009 reboot and 2011 sequel.  When we first meet this version of the famed detective, played by Sir Ian McKellen, he’s a 93-year-old man living in a farmhouse and battling dementia.  He has to write people’s names on his shirt sleeve so that he can remember them.

Now that his career has wrapped up, Holmes is starting to think about his legacy.  His good friend and ex-partner, Dr Watson, wrote a series of popular books that detailed the many cases they solved together.  Holmes knew that Watson was loose with the facts (never let the truth get in the way of a good story) but the books achieved their purpose – the public regard him as one of the great sleuths of all time.

Notwithstanding his fame and fortune, there’s one case that still frustrates Holmes.  Watson wrote about a married woman who had been struggling to come to grief with two miscarriages.  Her husband had asked Holmes to investigate why she was spending so much time with a mysterious music teacher (de la Tour).  The finale in Watson’s novel never felt right to Holmes.  He wants to set the record straight and tell the “true” story.  The problem is that he can’t remember it.

In 1998, Ian McKellen teamed up with director Bill Condon to make the brilliant Gods & Monsters (which earned a rare A+ grade from me).  Condon won the Oscar for best adapted screenplay and McKellen earned his first nomination for best actor (losing to Robert Benigni who has done very little since).  It’s a delight to see them working together again and that fact alone is worth the price of admission.

It’s easy to see why they were attracted to the project.  Despite everything I’ve already mentioned, Mr Holmes isn’t really a whodunit tale.  It’s a sad, heart-warming drama about an old, prickly man in desperate need of a connection.  That need is met through two people – his lonely, middle-aged housekeeper (Linney) and her inquisitive, young son (Parker).  It proves that it’s never too late to make new friends.

Screenwriter Jeffrey Hatcher (The Duchess) has done a beautiful job weaving the film’s multiple narratives together.  As Holmes reflects on the case of the married woman, he applies the learnings to his current situation.  It leads to a memorable punch line that has something to say about the value of fiction when compared to reality.

I don’t believe Mr Holmes will generate the same awards season heat as Gods & Monsters but it’s still a film to seen and appreciated.