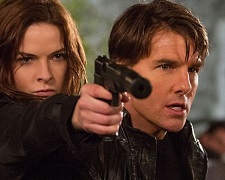 Do we really need another Mission: Impossible movie?  Probably not.  We’ve already had 4 films where Ethan Hunt (ala Tom Cruise) has extricated himself from ridiculous situations and apprehended bad guys threatening to destroy the world.  This film is nothing different.  James Bond has been doing this sort of stuff since the 1960s!

That’s not to say that the film isn’t any good.  Let’s say you have a hilarious friend who has mastered the art of joke delivery.  You hear them tell the same joke to different groups of people but you still laugh every time.  You realise that it’s not necessarily the punchline that makes you laugh… but rather the terrific way they deliver the joke.  That’s what makes it funny.

It’s an analogy that articulates my feelings about writer-director Christopher McQuarrie (Jack Reacher).  He knows we’ve seen this kind of story before.  There’s nothing remotely original about the screenplay and yet, McQuarrie keeps us interested thanks to some wonderfully choreographed action sequences.

There’s a moment where a terrorist organisation is trying to kill the Austrian President while attending the opera in Vienna.  Hunt sneaks around backstage and stops the assassins with seconds to spare.  The packed crowd are oblivious to these happenings as Giacomo Puccini’s famous aria “Nessun dorma” has deafened the sounds of punches and gunfire.  The hovering camera of cinematographer Robert Elswit (Good Night & Good Luck, There Will Be Blood) adds to what is the film’s best scene.  It’s like an opera within an opera.

It’s not the only highlight.  There’s a motorcycle chase late in the film that has been skilfully edited by Eddie Hamilton (Kick-Ass, Kingsman) and features an equally impressive array of camera angles.  Christopher McQuarrie’s kick started his career by writing The Usual Suspects (it won him a screenwriting Oscar) but he’s adapting quickly to the action genre as illustrated by Jack Reacher (wrote & directed) and Edge Of Tomorrow (wrote).

Tom Cruise has the passion and charisma that suits a role like this.  He even removes his shirt inside the first 15 minutes.  Simon Pegg again provides the comic relief as Hunt’s computer hacking offsider.  Alec Baldwin is a new inclusion as a CIA director trying to get Hunt under control.  Despite all the big names, it’s a relative unknown who steals the show.  Swedish born Rebecca Ferguson keeps you guessing throughout the film as a mysterious individual with unknown intentions.

It’s a shame the keynote villain is so bland.  Solomon Lane (Harris) is head of The Syndicate – a shadow organisation that is trying to destabilise Western democracies.  We eventually learn about his background but it doesn’t make much sense and it’s not all that interesting.  He’s just a well-funded lunatic with a bunch of dumb henchman.  As the evil dude in the last James Bond film (Skyfall), Javier Bardem could teach him a few things.

The “everyone knows everyone’s next move” stuff gets tired but on the whole, there’s enough here to ensure the Mission: Impossible franchise will live to fight another day.