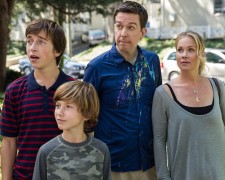 One of my earliest movie memories is of my father bringing home National Lampoon’s Vacation from the video store on a fresh VHS cassette.  I’ve lost count of the number of times I’ve now seen the film.  It’s a crude yet hilarious journey about a family travelling across the country to visiting a fictional theme park (Walley World) in California.  Three sequels followed.

The thought of a reboot didn’t fill me with excitement.  You don’t mess with the classics.  The writing team of John Francis Daley and Jonathan M. Goldstein (both responsible for the likable Horrible Bosses) have created a film that is very aware of its predecessor.  For example, it opens with the same “Holiday Road” song made famous back in 1983.

The story is kind of the same and kind of different.  Rusty Griswold (Helms), the son in the earlier movies, is now grown up and married with two kids of his own.  He is based in Chicago and works for the low budget airline known as Econo-Air.  When welcoming his passengers over the public-address system, he thanks them for their support and then adds “we’re working hard to win back your trust.”  He’d rather be working for a better airline with better pay.

Life at home isn’t ideal either.  His wife, Debbie (Applegate), is starting to show signs of disinterest.  Their sex life is on the wane and the struggle to find the time to do stuff together as a couple.  The eldest son, James (Gisondo), says a lot of weird things and carries around a “dream diary” and a “wish journal”.  He’s also being bullied by the foul-mouthed youngest son, Kevin (Stebbins), who is in need to both direction and discipline.

Rusty’s solution is to ditch their normal summer vacation and do something different.  Borrowing his father’s idea, he wants to get a new car and go on a 4,000 km road trip to Los Angeles.  It’ll give the chance for them to bond as a family, visit a few relatives, see some famous landmarks, and finish in Los Angeles where they can ride the keynote rollercoaster at Walley World.

There’s nothing ground-breaking here in terms of comedy but there’s a nerdish quality to the family that makes them likeable.  They’re goofy and awkward but you know their heart is in the right place (well, perhaps except for the youngest son).  The best scenes involve them conversing/bickering in the car.  It’s when they feel most real.  The worst scenes involve the odd assortment of characters the family meet along the way (such as a suicidal kayaker and a mysterious truck driver).  These moments feel too forced and manufactured.

There’s room at the end for a cameo appearance from Chevy Chase and Beverly D’Angelo who reprise their roles from the 1983 original.  It’s nice to see them on screen again and they get a few easy laughs.  If anything though, this reboot makes we want to watch the earlier Vacation films again.  Those I could watch multiple times.  This one, I’m happy to have seen just the once.