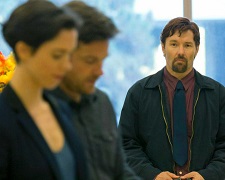 Ever got a Facebook friend request from an old high school buddy you have no interest in reconnecting with?  Do you accept just to be polite?  Or do you decline and hope they get the hint?  I’ve been on both sides of that equation.  There are times when I’ve been ignored and other times when I’ve been the ignorer.

It’s hard to make that situation into a movie but writer-director Joel Edgerton has made the non-social media equivalent.  Simon (Bateman) and Robyn (Hall) are a married couple who have just found a large, spacious new home in Los Angeles.  He works in IT security.  She works as an interior designer.

They’re shopping together one afternoon when a stranger comes up to them and introduces himself as Gordon Moseley (Edgerton), one of Simon’s old high school acquaintances.  Simon doesn’t recognise him at first but then it clicks – he’s the guy they teased at school and used to call “Gordo the Weirdo.”  Simon acknowledges he was mean to Gordo but he’s one of those people he never expected to see again, let alone interact with, after graduation.

It’s not long before a gift appears on the doorstep of Simon and Robyn’s new home.  It’s a bottle of wine from Gordo.  Robyn believes it’s a kind gesture and feeling sorry for the “socially awkward” Gordo, she invites him over for dinner.  Simon isn’t so sure and would rather have nothing to do with him.  Their differing opinions on Gordo threaten to disrupt their idyllic relationship.

The Gift marks the directorial debut of Joel Edgerton who had written several screenplays (Felony, The Square) but was still waiting for a project that would make a great directorial debut.  The small budget (just $5m) and fact that he wanted to cast himself in the “creepy” role of Gordo made this is the best choice.

Edgerton has done a great job and this is an above average thriller.  The house features spacious rooms and huge glass windows which add to the suspense of the situation when characters are alone.  There’s a noticeable lack of music too which amplifies the smallest of sounds during the film’s scarier scenes.  You may not be jumping out of your seat but you’re likely to be feeling a little uncomfortable.

Hollywood has a tendency to favour characters that are either purely good or purely evil.  The Gift doesn’t take that path and a result, without giving too much away, you’ll be kept guessing about these three characters until the very end.  Which will you feel the most empathy for as the credits start to roll?  Opinions will vary.

You can read my chat with writer-director Joel Edgerton by clicking here.