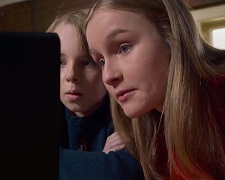 15-year-old Becca (DeJonge) and 13-year-old Tyler (Oxenbould) will be spending a week with their grandparents while their mother (Hahn) and her new partner take a well-overdue holiday.  It may sound like a common scenario but this is anything but.  Becca and Tyler have never met their “Nana” and “Pop Pop” before.  Their mother had a falling out with them 15 years ago for reasons she has kept quiet.  The grandparents have finally reached out in search of a fresh start and their mother has extended the olive branch.

They catch a train from suburban Philadelphia to rural Pennsylvania and are greeted by their grandparents (played by Deanna Dunagan and Peter McRobbie) at the station.  It’s a slightly awkward exchange but you’d expect that given the circumstances.  Nana is quick to criticise Tyler for wearing his parents too low – an obvious way of highlighting the generational gap between them.

Everything we see in the film is from the perspective of the two teenagers.  Becca is a budding filmmaker and so she is capturing the whole weekend on her hand held video cameras.  Tyler is helping out.  She wants to turn it into a documentary that explores her grandparents past and the reasons why they’ve never seen their grandchildren until now.

From their first night in the house, Becca and Tyler sense something is amiss.  They are told that they need to be in bed by 9:30pm and that they shouldn’t venture out from their bedroom until the following morning.  After hearing strange noises, curiosity gets the better of them.  They open their bedroom door and see their naked grandmother wandering through the house and furiously scratching the walls.  It’s quite creepy.

The film marks a return to form for writer-director M. Night Shyamalan who rose to fame in 1999 with The Sixth Sense and followed that up with the equally impressive Unbreakable and Signs.  His recent efforts haven’t been well received.  The Last Airbender (2010) and After Earth (2013) were big studio movies with $100m budgets but both were savaged by critics and struggled at the box-office.

There are the few parts to The Visit that don’t quite gel.  For example, it’s hard to go along with the Paranormal Activity-like “handheld footage” approach, particularly in the later stages.  These kids are supposed to be scared.  Why are they still making their documentary and getting conveniently great camera angles?  Without giving away details, I’d also argue that the more you think about the finale, the less sense it makes.

I enjoyed the lead up through.  Shyamalan scoured the globe for the perfect young actors and found both of his two leads here in Australia – 17-year-old Olivia DeJonge from Perth and 14-year-old Ed Oxebould (Alexander & The Terrible, Horrible, No Good, Very Bad Day) from Sydney.  The film has the appearance of a scary thriller but it’s surprisingly comedic.  Oxenbould gets the best of lines including a recurring joke where he uses the names of female singers in place of swear words.

The ending will divide audiences but The Visit offers enough intrigue to warrant a trip to the cinemas.

You can read my chat with writer-director M. Night Shyamalan by clicking here.