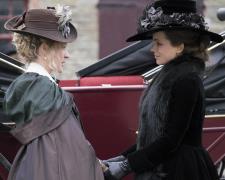 It’s remarkable how Jane Austen’s works have endured for close to 200 years.  The love for her novels has spawned numerous films and television miniseries that have only further enhanced her place in history.  Some adaptations have stuck strictly to the source material such as Ang Lee’s Oscar-nominated Sense & Sensibility (1995) and Joe Wright’s Pride & Prejudice (2004).  Other adaptations have been looser.  Clueless, Bridget Jones’s Diary, and Pride & Prejudice & Zombies are three very different movies that have all been inspired by Austen’s famed characters.

Jane Austen died at the age of 41 and only had the chance to complete 6 novels (two of these were published posthumously).  More than 50 years after her death, her nephew released a biography that featured other writings from Austen that had never been made public.

It included a short epistolary novel entitled ‘Lady Susan’ that consisted of 41 letters written back and forth between respective characters.  Austen had used the “letter writing approach” as a starting point for other books (e.g. Sense & Sensibility) but historians are unsure why she didn’t go that extra step in this case.  Was she unhappy with what she had written?  Or did she simply not have time?

Writer-director Whit Stillman (The Last Days of Disco) has long been a fan of Austen’s work.  His sister introduced him to Pride & Prejudice while studying at college and his first feature film, Manhattan (1990), was loosely based on Mansfield Park.  He seems like the right choice to give us this “fresh” Jane Austen tale.  Stillman spent more than a decade extracting a workable narrative from book’s letters and it’s the very first time that Lady Susan has been brought to the big screen.

Going by the title of Love & Friendship, this does mark a significant departure from the Jane Austen many will be familiar with.  Her novels often revolve around young, kind-hearted women trying to win the affections of wealthy, older men.  That’s not the case here.

Lady Susan Vernon (Beckinsale) is a scheming, middle-aged widow who has a habit of always getting her own way.  She sleeps with married men, she’s treats her friends like servants, and she rarely listens to the opinions of others.  Her current focus is on seducing the young Reginald De Courcy (Samuel).  He’s a handsome gentleman but she’s more interested in his bank account.

This is a delightful, entertaining comedy filled with wonderful dialogue.  Some characters are manipulating, some characters are being manipulated, and some characters are powerlessly watching the manipulation unfold.  She may sound like a hideous individual but Lady Susan continually charms with great one-liners.  After spending time with her brother’s children, she proudly gloats “I know some of their names already” as if it’s some kind of achievement.

The film features a big ensemble with multiple storylines.  To bring audiences up to speed, Stillman opens with a slick introduction that is both unorthodox and appropriate.  The cast is terrific with Tom Bennett shining as Sir James Martin, a dopey suitor pursuing Lady Susan’s daughter.  His original role was much smaller but Stillman wisely added more scenes with Bennett when he realised his comedic potential.  Kate Beckinsale also deserves praise for delivering her dry, witty lines with great timing and precision.

I think Jane Austen would have enjoyed this.