Review: The Girl On The Train 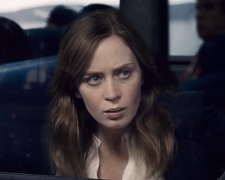 The life of Rachel Watson (Blunt) is a mess.  She’s a thirty-something-year-old woman who went through a nasty divorce, lost her job at a PR firm, and is now a struggling alcoholic.  The only high point of her daily routine is when she goes on a lengthy return train ride from Westchester County to Manhattan.

It is during these train rides where Rachel uses her “overactive imagination” to push her problems aside.  She takes sips from her big water bottle (which is actually filled with vodka) and delves into a world of fantasy.  She looks around the train carriage and conceives fictitious stories about other passengers.  She does the same when passing some of the beautiful houses situated beside the train tracks.  She’s created backstories for the residents and adds a little more to her fantasy each day.

Rachel’s troubled existence takes a further twist when a police detective (Janney) arrives at her doorstep.  A young woman went missing in a nearby park and Rachel was identified by witnesses as being in the area at the time.  She has no answers though.  She caught the train at 6pm, arrived home at 11pm and doesn’t know what happened in between.  The most plausible scenario is that Rachel was passed out drunk somewhere (it certainly makes sense to the detective) but not everything is what it seems in this peculiar mystery.

It’s not often that a movie studio buys the rights to a book before it is first published but that was the case with The Girl on the Train.  A book scout for Dreamworks Pictures came across Paula Hawkins’ manuscript and thought this female-centric murder thriller might appeal to the same crowd that made Gone Girl such a box-office smash.  Their instincts were right.  When the book was actually released in 2015, it sold more than 1 million copies in the first 2 months.

Screenwriter Erin Cressida Wilson (Secretary) and director Tate Taylor (The Help) have struggled in translating the novel into a cinematic form.  To illustrate the turmoil inside Rachel’s head, they’ve given the film a rough, fragmented feel that continually slips between events and timeframes.  Perhaps it was the casting of Justin Theroux that triggered the thought but the movie reminded me of Mulholland Drive in that you won’t know what’s real and what’s not.  This isn’t as big a challenge though.  As Rachel’s mind starts to sharpen, so too does the narrative.

Emily Blunt (The Devil Wears Prada) is the film’s strongest asset.  She uses an array of tears, bloodshot eyes, and quizzical looks to bring her character to life.  It’s as if she’s goes through every human emotion with the exception of laughter.  There are several key scenes where Rachel builds up a little confidence only to have torn away by insecurities and self-doubts.

Without giving too much away, I wasn’t wholly satisfied by the finale.  It’s like a jigsaw puzzle with a few pieces missing.  The Girl on the Train offers intrigue and a few red herrings but doesn’t provide a knockout punch.