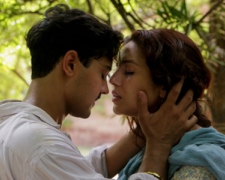 Between 1858 and 1947, there were 24 Viceroys of India.  They were appointments made by the British Crown and their main responsibility was to head the central government of India.  When Lord Mountbatten was appointed to the position by Prime Minister Clement Attlee in February 1947, he knew that he would be the last Viceroy of India.  His key role was to help transition the country from British rule to an independent republic.

Acclaimed filmmaker Gurinder Chadha (Bend It Like Beckham) spent most of her upbringing in London but she has always had an interest in India history given her family ancestry.  In 2006, she appeared on the British television series Who Do You Think You Are? – a show where celebrities trace back through their family tree.  It promoted her to do more research into India’s independence and provided the inspiration for this dramatic film.

The story is told from several perspectives.  As you’d expect, we see things through the eyes of Lord Mountbatten (Bonneville) and his wife, Edwina (Anderson).  Both characters are portrayed as even-handed and open-minded.  They haven’t come with a specific plan of attack and are prepared to listen to the thoughts of India people.  There’s a scene where Edwina discusses the idea of delaying independence but for a good reason – to improve literacy and to reduce death rates before the handover.

To show the effect on the Indians themselves, the three-person writing team have created a fictional love story that is given equal weighting.  Jeet (Dayal) and Aalia (Qureshi) are servants who work at the Viceroy’s residence and get the chance to eavesdrop on some of the top-secret political negotiations as they take place.  The pair fall in love but it’s a Romeo & Juliet-type scenario given that he is a Hindu and she is Muslim.  Their respective families are not impressed.

The reason for that particular story is that it highlights the religious divide within India and a key issue that was at the heart of India’s desire for independence.  Some were pushing to split the country into two – Hindus would remain in India whilst Muslims would form part of a new country to be called Pakistan.  Others were against the proposal and wanted to see the country remain united.  After months of lobbying, it would fall upon the Viceroy to make a final decision.

In creating the screenplay, Chadha drew from a 2006 book written by Narendra Singh Sarila that had been recommended to her by Prince Charles.  He was a former civil servant who worked as a personal aide to Mountbatten and had recently discovered a suite of top-secret documents that provided insight into how the negotiations unfolded.  His version of history was not the same as that being taught in schools and some scholars still disagree with the content of his book.

A strength of the film is its balanced nature.  While events may not have taken place precisely as depicted, you do see varying points of view in deciding the right path to independence.  Muhammad Ali Jinnah puts forward a persuasive argument for splitting the country into two whereas Mahatma Gandhi argues strongly in maintaining the country as a whole.  The composition of the respective governments and the election process is also openly debated.

The storyline between Jeet and Aalia is a little corny and distracting but it provides an emotional kick that becomes important during the film’s epilogue.  The magnitude of the situation takes shape and it’ll be a learning experience for those who aren’t familiar with this piece of Indian history.

You can read my interview with director Gurinder Chadha by clicking here.