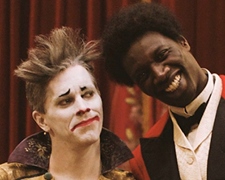 History is littered with fascinating individuals.  Some are widely known.  Some are hardly known at all.  Rafael Padilla fits into that second category.  Played in this film by Omar Sy (The Intouchables), Padilla made a name for himself working as a circus performer in the late 19th century.  As the film opens, we see he’s part of a small troupe travelling through northern France.  His act isn’t particularly challenging.  He plays a cannibal who jumps around the stage and frightens the audience.  They appear to be just as scared by the fact he is black – such are their racist tendencies.

Padilla catches an unlikely break when he is approached by a struggling clown looking to spice up his act.  George Foottit (Thierrée) is on the verge of being fired and in a rare moment of inspiration, he decides to team up with Padilla to become one of the first black-white comedy duos.  They gel instantly with both acting like a complete fool on stage.  In fitting with the audience’s wishes, it is Padilla who ends up being the butt of most of jokes and he is given the stage name “Chocolat” to fit with his dark skin.

It’s not long before Foottit and Padilla are whisked away to Paris and are playing in front of large, sold-out crowds every night.  It’s an incredible rise to stardom for Padilla who was born into poverty, raised in Cuba, and sold to a Spanish slave trader when just a boy.  He now had more money than he could ever dream of.  While most black people were struggling to put food on the table, he was driving around in a flash new car.

There was a dark side however.  The fact remained that he was always considered “secondary” to the more high profile Foottit.  That was evident in their pay packets.  Further, audiences were still just as racist.  It felt like they were laughing “at” him as much as they were laughing “with” him.  Padilla also had a few self-inflicted wounds.  He developed an addiction to drinking and gambling which threatened to derail his career and relationships.

Monsieur Chocolat is an interesting tale that offers much to digest.  Padilla broke through barriers and “changed the nature of comedy” in the early 20th Century.  There’s a nice clip during the closing credits that shows rare footage of the real Padilla as he and Foottit perform a small part of their act.  It’s amazing to think that it’s survived more than a century.  We also get a glimpse of life as a performing artist in the early 1900s and see that it was just as tense and just as competitive as it is today.

Omar Sy and James Thierrée deliver fine performances that highlight the strengths and flaws of their respective characters.  Your opinions of them will most likely oscillate throughout the two hour running time.  James Thierrée took home the César Award earlier this year for best supporting actor with Omar Sy also nominated in the best actor category.  Their recognition was deserved.