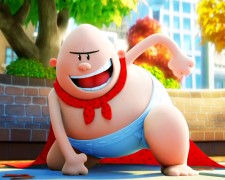 Another two weeks of school holidays is upon us and with that, comes a flurry of new animated movies.  Captain Underpants: The First Epic Movie has an unusual title but will already be familiar to those who have read the children’s book series.  It was the brainchild of author Dav Pilkey who penned a total of 12 novels between 1997 and 2015.  He was reluctant to give up the movie rights at first but ultimately sold them to DreamWorks Animation after an auction in late 2011.

As a newbie to the material, I’ll admit that the premise is cute and the characters are fun.  George (Hart) and Harold (Middleditch) are two fourth grade students who have been next door neighbours and best friends for many years.  Both have active imaginations and they spend much of their spare time creating comics in their treehouse.  George does the writing and Harold takes care of the illustrations.

These two have a great sense of humour… which is not shared by Principal Krupp (Helms).  The sign on his desk reads “hope dies here” and it epitomises the way in which he runs the school.  His latest way of punishing the kids is to make them come in all day on Saturday for an “Invention Convention.”  It’s why the students refer to at a “penitentiary” school as opposed an elementary school.

George and Harold have taken it upon themselves to bring joy back to the school.  They’re forever orchestrating pranks and whilst Principal Krupp has his strong suspicions as to who’s responsible, he’s yet to catch them in the act.  There are other characters in the mix including a smart, nerdy kid who wants to impress (Peele) and the school lunch lady (Schaal) who is in search of romance.

It’s at this point where things get a little weird.  George and Harold use a special ring to hypnotise Krupp and have him believe that he’s their comic book creation, Captain Underpants.  He strips down to his white jocks and uses a red curtain as a makeshift cape.  Having a fun-loving superhero as principal quickly breathes life back into the school… but it also sets in motion a series of chaotic events headlined by a new villainous school teacher, Professor P (Kroll).

I’d suggest this film is targeted at pre-teens based on the style of jokes.  There’s a scene where a teacher talks about Uranus as being a gassy planet and another moment involving whoopee cushions.  There’s not a lot of adult humour but for those grown-ups who read the books as children, there might be an interest in seeing how it has been translated for the big screen.  You won’t have to waste too much time given it clocks in at a tight 89 minutes.

The voice cast is headlined by Kevin Hart (Ride Along) and Thomas Middleditch (Silicon Valley).  They’re both in their mid-30s but smoothly transform their voices into something befitting a 10-year-old.  Ed Helms (The Hangover) steps into the shoes of Principal Krupp and Nick Kroll (Loving) couldn’t sound more sinister as the crazy Professor P.  They’re a strong, well-chosen group of voices.

My interest waned during the chaotic final act when the narrative is put aside and we’re treated to a ho-hum, over-the-top action fest.  I was hoping for something a little more creative or perhaps something with a stronger emotional core.  That said, I like these characters and I’ll continue to show an interest if sequels are given the green light.