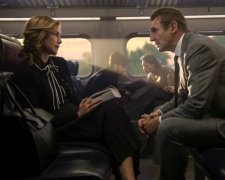 We’re only a few weeks into 2018 but I’m comfortable in saying that The Commuter is one of the worst action films of the year.  It marks the fourth collaboration between Spanish director Jaume Collet-Serra and actor Liam Neeson.  Unknown was about a guy with amnesia who had his identity stolen.  Non-Stop was about an alcoholic air marshal aboard a hijacked flight.  Run All Night was about a hitman called out of retirement to protect his son.

If you think those storylines are over-the-top, wait until you see what’s been manufactured with The Commuter.  Liam Neeson plays Michael – a successful, hardworking insurance salesman with a loving wife back home.  Scratch that.  He’s unexpectedly fired in one of the film’s opening scenes.  With his son is about to head off to an expensive college, he’s got no idea how he’ll be able to pay the tuition fees and all the other bills that will soon mount up.

It’s at this point where the mayhem begins.  Michael is on the same train he’s caught to work every day for the past ten years and is approached by a mysterious woman (Farmiga).  She cryptically tells him that “someone on this train does not belong” and if he can find out who the person is before the train reaches its final destination, he’ll be rewarded with $100,000.  If he tells anyone about the task or alerts the authorities, his family will be in jeopardy.  She provides no meaningful information aside from that.  We don’t even know what the person looks like or what they’re hiding.

After quietly walking around the train and narrowing the list of suspects (based on the ticket stubs protruding from their seats), he starts asking a few questions.  It’s not long before pandemonium breaks out with everyone looking at Michael as if he’s some kind of deranged lunatic (deservedly so) and the incompetent security being called in.  He finds a way to avoid being captured so as to continue with his investigative work.

I love a good action-thriller but the content of this film doesn’t make a lot of sense.  It’s hard to believe how those behind the assignment are smart enough to create this elaborate task (complete with a bizarre hit and run) and yet they can’t figure out the identity of the person themselves.  It’s also a struggle to comprehend how everyone on the train remains on board despite Michael’s actions.  They keep talking to him too!

I won’t spoil the finale but it’s best to lower your expectations with The Commuter.  There’s no cool, original twist that justifies the tiring opening hour.  There’s just more farce and more unrealistic plot developments.  Liam Neeson recently announced that he’s retiring from action movies and whilst it’s been a fun ride (some of his movies have been great), it’s sad that he’ll be finishing on such a lacklustre note.