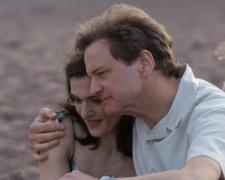 When talking about movies adapted from real life stories, I’m often cautious about how much to reveal about the plot.  We all know that the Titanic sunk in 1912, the Nazis were defeated during World War II in 1945 and two planes struck the World Trade Centre in New York in 2001.  Films have been made about these events and given the audience knows how things will pan out, the writer’s focus is more character development and filling in the gaps on smaller, lesser known details.

I’m in a slight pickle when it comes to The Mercy because this true story, which took place in 1968 and 1969, is very interesting.  However, to fully explain why it’s interesting would require me to spoil the ending.  That’s not my intention.  Those old enough might remember the coverage on TV and in newspapers.  Some might be familiar with documentaries and films which have previously analysed the subject.  Others, such as myself, may be introduced to Donald Crowhurst for the first time.

The stage is set fairly quickly.  As of the start of 1968, no person in human history had completed a single-handed, non-stop circumnavigation of the world by boat.  The British Sunday Times newspaper hoped to inspire budding yachtsman by instigating a competition.  Entrants could leave any time between 1 June and 31 October 1968 with the first person to complete the task winning a trophy and the fastest competitor earning at cash prize of £5,000 (a hefty sum for the time).  A total of nine sailors gave it a crack.

One of those was Donald Crowhurst (Firth), a recreational sailor who sold navigation equipment.  Despite never having attempted a journey of such length, he made the curious decision to enter the race.  He mortgaged his house and his business and constructed a boat which he believed could get the job done.  He left behind a wife and two children and set out from the town of Teignmouth, Devon on the last day possible – 31 October 1968.

It’s at this point where you may believe the film is a David and Goliath story where a complete unknown overcomes big odds to emerge the victory.  This is not that kind of story.  Things don’t go so well during the early stages.  Given the rush to complete the boat on time, there are construction issues which quickly become apparent.  Donald’s navigation skills also leave a lot to be desired.  It’s here where he makes an unexpected decision – to cheat.

I’ll leave it at that in terms of narrative.  There are shades of the Robert Redford film All is Lost in that we’re following a single man at sea with nothing but water around him.  As that runs the risk of being a bit boring, writer Scott Burns (The Bourne Ultimatum, Contagion) gives equal weighting to scenes back in the U.K. where we follow Crowhurst’s wife (Weisz) and publicist (Thewlis) along with friends, business partners, and a thirsty media.

There’s an element of repetition in some scenes that shows the struggle to take this material and stretch it into a full length feature.  As an example, we are continually provided with glimpses of journalists who have been asked to write longer and longer articles about Crowhurst and his family.  Aside from Crowhurst himself, the most interesting character is his wife but she isn’t given a lot to do except provide moral support before he leaves and look concerned after he departs.

Where The Mercy succeeds is in the exploration of Crowhurst and his warped mindset.  You’re not quite sure why he’s signed up for such a risky yachting race but we learn more about him and his rationale as the film progresses.  He’s dug himself into a hole but in trying to find a way out, he’s only made the hole deeper.  You can see the nervous, apprehensive look on Colin Firth’s face as he says good bye to his family and sets sail.

Directed by Academy Award winner James Marsh (Man on Wire, The Theory of Everything), this another quality “truth is stranger than fiction” tale.