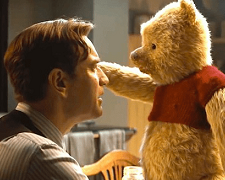 Director Marc Foster has made some very good films (Monster’s Ball, Stranger than Fiction World War Z) but it was pressure from his 6-year-old daughter that lured him into different genre.  She was tired to him making movies for “grown-ups” and so when the script landed on his lap for a live-action Winne the Pooh film, he was quick to throw his hat in the ring and pitch his vision to Walt Disney Pictures.

Christopher Robin is based on the famous characters first created by author A.A. Milne in 1926 but this is an original story.  In this books, Christopher Robin was a young boy who was best friends an assortment of characters including Pooh, Tigger and Eeyore.  His narrative wrapped up the final chapter of Milne’s second book when he left the Hundred Acre Wood behind and headed off to boarding school.  The time had come to shred his innocence and learn about the real world.

After a great introduction that reflects on Milne’s writings, Foster’s film then introduces us to the grown up version of Christopher Robin (McGregor) who is living on London in the years following World War II.  He’s happily married with a young daughter but is work-life balance is completely out of kilter.  He recently had to cancel a family holiday to the country because his demanding boss asked that he work all weekend or an urgent report to cut costs from the company.

It’s at this point that Winne the Pooh re-enters his life unexpectedly and the pair go on a trip back to the Hundred Acre Wood to help Pooh find his lost friends.  The analogy here is obvious.  We often lose our sense of fun and adventure when we become adults and with Christopher’s life dominated by work, the time has come to tap back into his childhood and relook at things with a fresh perspective.

It’s heavy-handed in places but the writers could be forgiven given this is a family film targeted at people of all ages.  Children should engage with the cute, fluffy characters and will absorb the obvious messages.  There’s not as much for the adults but they should still get a laugh from the manically depressed Eeyore (voiced by Brad Garrett) who can’t catch a break.

When it comes to the work of the animation team, the level of detail is outstanding.  They’ve even included the stitching lines on these stuffed creatures to make them look and feel like they’ve been pulled from a toy box at home.  Many voices will be recognisable such as Toby Jones as Owl and Peter Capaldi as Rabbit.  Jim Cummings provides the voice of Pooh and you couldn’t ask for anyone more knowledgeable given he’s been voicing the character in Disney cartoons since the late 1980s.