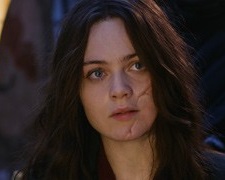 New Zealander Christian Rivers always had a love for movies growing up and, in an attempt to break into the industry, the 17-year-old sent a bunch of drawings into Peter Jackson in the early 1990s with hopes of landing a job.  It worked.  Rivers was hired as a storyboard artist for the zombie comedy Braindead (released back in 1992) and since then, he has been a part of every Peter Jackson directed film in a number of capacities.  He even won an Oscar in 2006 as a visual effects artist on King Kong.

Decades of experience have led Rivers to this moment – an opportunity to sit in the director’s chair and pull the strings on his first feature film.  There’s a lot at stake too.  Fans of Philip Reeve’s best-selling 2001 novel will be curious to see how it has been condensed and adapted for the big screen.  Investors will be nervous given the $100 million budget and the largely unknown cast.  The future of this new franchise will most likely be determined by the early box-office.

This will sound like a backhanded compliment (probably because it is) but the film’s most interesting element is the world in which it’s set.  The human race was all but obliterated in the early 22nd century when the Earth’s crust shattered during the “Sixty Minute War”.  Mortal Engines is set another 1,600 years after that cataclysmic event where technology has regressed (it was all lost during the war) and humans have created a very different way of living.

In rebuilding the world from scratch, leaders got creative.  High-rise cities such as London were set on wheels so they could move about the world in search of food, water and energy.  It sounds practical but there’s also a more sinister element.  Large predatory cities attack smaller ones and the citizens watch with amusement as if it’s some kind of sport.  This is illustrated in an action-packed opening sequence which, to the backdrop of a pulsating film score from Antonius Holkenborg, creates a cool Mad Max: Fury Road type vibe.

If only the story had the same level of creativity and originality.  Instead, we’ve got some characters repeatedly throwing up cheesy lines and others providing obvious spoilers as to their fate (“if I should die…”)  Perhaps the narrative could have been saved by a charismatic, thought-provoking villain but again, that’s lacking here.  Australian Hugo Weaving (The Matrix) plays Thaddeus Valentine, the quasi-mayor of a giant city who seems to be driven by power and nothing else.  There’s no subtlety to the character nor any reason to appreciate his point of view.  I don’t even know why people fight alongside him.

The team of “good guys” are headlined by Icelandic actress Hera Hilmar (An Ordinary Man) and Irish-born Robert Sheehan (Misfits).  They play two stereotypical heroes, Hester and Tom, who are tasked with the responsibility of removing Thaddeus from power.  They also develop a romantic connection which ticks off another genre (in addition to action, comedy, drama and sci-fi).  The only appealing character in the mix is a green-eyed robot named Shrike (played by Stephen Lang) who, unlike everyone else, is tricky to read and keeps you guessing.

The special effects are top-notch and there are some great ideas at play here but regrettably, Mortal Engines doesn’t quite connect.

You can read my chat with director Christian Rivers by clicking here.