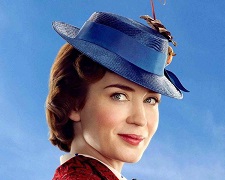 Mary Poppins was a stunning success both critically and financially.  It was the third highest grossing film of 1964 in the United States (behind My Fair Lady and Goldfinger) and it won 5 Academy Awards including best actress for star Julie Andrews.  It’s taken more than 54 years but we finally have a second instalment for those wanting more from this famed character.  In terms of a live action movie, that’s the longest ever gap between an original and sequel (excluding direct-to-DVD stuff) in the history of cinema.

The reasons for the delay have been well documented.  The author of the books, P.L. Travers, was one of the rare few who detested the original Mary Poppins.  This was humorously explored in the 2013 comedy Saving Mr. Banks which starred Emma Thompson as Travers and Tom Hanks as Walt Disney.  Travers had been approached many times about a sequel but she refused to give up the rights unless she had full creative control over the story, settings and characters – a concession that Walt Disney Studios wasn’t prepared to give.

Travers passed away in 1999 and the copyright of Mary Poppins was vested in her estate.  Its trustees were a little more receptive to the idea of a sequel and Oscar-nominated director Rob Marshall (Chicago, Into the Woods) was able to make a successful pitch.  His idea was to tap into the storylines of other Mary Poppins books that Travers had written (there were 8 in total between 1934 and 1988) and come up with a script that retains the essence of her writing and the soul of her characters.

Mary Poppins Returns is set roughly 25 years after the original and the two Banks children have grown up.  Michael (Whishaw) is a widowed father of three who is struggling to make ends meet and his sister, Jane (Mortimer), is doing her best to help.  When a greedy, sinister bank manager (Firth) demands their house be repossessed to pay an outstanding debt, the family have less than a week to locate a missing bank share certificate which they can use as collateral.

The time has come for Mary Poppins (Blunt) to make an appearance and just as she did in the earlier movie, she gracefully floats down with the help of a talking umbrella.  She takes Michael’s three kids on a few magical adventures while he has time to search for the share certificate.  Tony Award winners Marc Shaiman and Scott Wittman, who wrote the music and lyrics for the Broadway musical Hairspray, provide the light, easy-to-follow soundtrack.

I can see why some have been critical of this follow-up but I was lured in by the songs and its nostalgic feel.  Mary Poppins was one of my favourite movies growing up and it’s nice to see a family-oriented musical in cinemas once again.  They don’t come along very often these days.  From the creativity of “The Royal Doulton Music Hall” sequence to the craziness of the “Turning Turtle” cameo with Meryl Streep, there are a lot of memorable moments.  My mouth was sore from smiling so much.

There’s not a lot of nuance to the character but Emily Blunt (The Devil Wears Prada) is still wonderfully good in the title role.  Mary Poppins is 100% in control of every situation and it’s so much fun to watch her confuse the children with riddles and lure adults under her spell.  Lin-Manuel Miranda, the creative vision behind the successful musical Hamilton, also charms as a young lamplighter with his thick cockney accent.  There’s no sign of Julie Andrews (she didn’t want to detract from Blunt) but Dick Van Dyke makes a well-timed appearance by reprising a character he created back in 1964.

Making the most of 21st century technology when it comes to special effects and cinematography, Rob Marshall hasn’t improved on the original but he’s created something worthy to sit alongside.