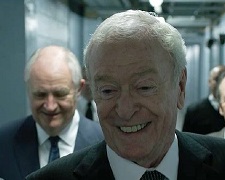 When it comes to heist flicks, there are three elements of the story to explore – planning, execution and aftermath.  It’s the job of the screenwriter to work out precisely how much time to devote to each.  In putting together a script for King of Thieves, Joe Penhall (The Road, Mindhunter) has hedged his bets and splits the time equally between the three parts.

The first half-hour is therefore spent getting to know the characters.  Brian (Caine) is a 77-year-old “retired” thief who sad, bored and restless following the recent death of his beloved wife.  To use his own words – “when someone dies, no one prepares you for the silence of an empty house”.  Looking to give his life purpose, he calls a few old friends and they start planning an elaborate robbery at a safe deposit facility in London.

Following in the footsteps of The Old Man and the Gun and The Mule, this film from Oscar-winning director James Marsh (Man on Wire, The Theory of Everything) continues the trend of elderly people committing crimes.  One minute they’re trying to work out how to break into a building and access the huge safe.  The next minute they’re taking heart medication and rubbing ointment on their stiff necks.  Oh, and in case you were wondering, this is a true story.

The robbery takes place during the second half hour and without giving too much away, it doesn’t go as smoothly as planned.  These men are experienced criminals but their old-school techniques are as much of a hindrance as they are a help.  I like the quote from the Scotland Yard’s head of specialist crime investigations who described them as “analogue criminals operating in a digital world”.  They were clearly in the dark when it came to things like CCTV footage, mobile phones and wire taps.

The momentum built during the opening two acts fizzles during a disappointing, unnecessarily long finale which focuses on the aftermath.  You always know how it’s going to end and it feels like you’re waiting for the inevitable (unusual for a heist flick).  The tension between the characters becomes tiring and the decision to add the perspective of the police force (through very short glimpses) adds next-to-nothing.

The cast features some of the best actors produced by Great Britain over the past few decades – Michael Caine, Jim Broadbent, Tom Courtenay, Michael Gambon and Ray Winstone.  There’s laughs to be had watching these quasi-incompetent characters but they can’t do enough to elevate the material into something more memorable.  Given this is based on such a crazy true story, this should have been better.