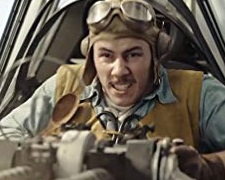 Three weeks ago, director Sam Mendes (American Beauty) showed how to make a creative, engaging, powerful war film.  This week, director Roland Emmerich (Independence Day) gives us the complete opposite.  Midway is a bloated, confusing, cliché-laden World War II movie that isn’t worthy of the actual events it is trying to recreate.

We’re told from the outset that the Battle of Midway was “the most important naval battle in American history.”  Most are familiar with Pearl Harbour but this lesser-known confrontation occurred around a tiny atoll, measuring just 6km2, in the middle of Pacific Ocean.  Over 3,000 soldiers were killed as the United States Navy fought off the substantive Imperial Japanese Navy across four days in June 1942.  Emmerich’s film runs for 138 minutes as, in addition to the battle, it chronicles the skirmishes and strategy discussions in the months beforehand.

Writer Wes Tooke (Colony) falls into the trap of covering too many characters in too short a time period.  As an example, there’s a sequence where we’re introduced (in some detail) to a young soldier who has been overcome by fear and lacks the courage to jump in a fighter plane.  Why go to such lengths to develop the character given his irrelevance to the broader story?  The same can be said of Aaron Eckhart who plays an air force flight commander who gets stuck in China and then disappears from the narrative.  Again, what’s the point of that subplot?

As for those who do get ample screen time, they all feel like they’ve been lifted from a 1980s action movie.  There’s the gung-ho cowboy pilot who risks his life and hates doing things by the book (Ed Skrein), there’s the concerned housewife who has nothing else to do except for stressing back on shore (Mandy Moore), and there’s the reluctant supreme commander who, having been specifically requested by the President, comes in to save his country (Woody Harrelson).

It’s a decent cast but they’re burdened by dreadful dialogue.  A commander admires an act as “the bravest damn thing I’ve ever seen” while a pilot gees up his fellow comrades by saying “we’re going to give them a shellacking!”  Let’s not forget the soldier who mentions it’s his last day of sea duty… I wonder what will happen to him???  A puzzling decision has also been made to provide a small glimpse of the Japanese perspective but it isn’t given the weight it deserves (cover it properly or don’t cover it at all).

Perhaps the worst material is saved for Patrick Wilson who plays an intelligence officer with a “sixth sense” for foreseeing the Imperial Navy’s strategy.  He’s the stereotypical character we’ve seen in many action movies before – the smart, scientific guy who everyone doubts and ignores (it happens countless times in this film) but when everyone realises his worth, they’re quick to pat him on the back and follow his every suggestion.

The big battle scenes during the final 45 minutes aren’t too bad but they’re the only redeeming quality of this tired World War II flick.  Many other filmmakers have done it before… and done it much better.