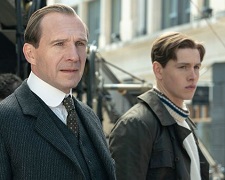 The change to the title is relatively minor.  Just a space and an apostrophe were required to go from Kingsman, used for the 2014 original and 2017 sequel, to The King’s Man, the name of this 2021 prequel.  The changes to the cast, tone and quality are much more significant.  I applaud the producers for taking a risk (most cash-grabbing follow-ups are as safe as Fort Knox) but the dull, weighty script doesn’t build into something meaningful.

In the same vein as Captain America: The First Avenger and Wonder Woman, writers Matthew Vaughn and Karl Gajdusek have created fictional heroes and placed them in a real war.  It’s a lengthy wait though if you’re hoping for action.  Much of this is a tired, cliché-laden family drama centred on a wealthy British duke, Orlando (Fiennes), and his naïve son, Conrad (Dickinson).

We’re shown a flashback from a decade earlier where Conrad’s mother is killed during the Boer War in South Africa while nobly working for the Red Cross.  In her final words, she asks Orlando to keep their son safe and “never let him see war again.”  Surprise, surprise, Conrad grows up and wants to enlist in the British army to fight the Germans in World War I.  Who didn’t see that coming?

Orlando, uncannily predicting it will be “not like any war we’ve ever seen”, tries to sabotage his son’s plans but alas, off to battle he goes.  We even get the obligatory scene where Conrad witnesses the horrors of the Western Front and acknowledges that his father was right all along.  It’s too rushed and cheesy to create any genuine emotional response.  Luckily, Conrad doesn’t have a girlfriend back home or else they’d have thrown in a scene of him looking at her photo before charging out of the trenches.

I should also mention that Orlando, who has taken a vow of pacificism since his wife’s death, now runs a secret “club” out of his basement with the help of his servants (hope they get a higher duties allowance).  They don’t get together to play cards or listen to the radio.  Rather, they are engaged in espionage and foreign interference because “some things are too important to be left to politicians”.  It’s curious that Orlando is so protective of his son’s safety and yet is happy to use him as part of the club’s dangerous missions in Bosnia and Russia.

The previous two Kingsman films were light-hearted romps which tried to offer something less serious than James Bond, Ethan Hunt and Jason Bourne.  That was part of their charm and they weren’t afraid to mock the genre.  The closest we get here is an amusing sequence where the heroes infiltrate a party hosted by Russian mystic Grigori Rasputin (played by Rhys Ifans in the film’s best performance).

Unfortunately, the rest of the movie is needlessly heavy.  Conrad has the personality of a wet sponge, Orlando wears everyone out with his living-in-the-past mentality, and the supporting club-members have very little to do (except arrive at timely moments to save the day and then slip back into the shadows).  A grand action finale atop a well-guarded mountain does nothing to get the adrenalin pumping or make you think anyone is in danger.

Keep your expectations low with this one.