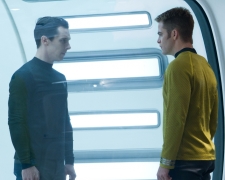 After the successful reboot of Star Trek back in 2009 (which pulled in $385m at the international box-office), it was only matter of time before we saw the next instalment. Director JJ Abrams is again at the helm but it’s likely this will be his last film in the franchise. He’s been tapped on the shoulder by Walt Disney Pictures to create a new Star Wars film for release in mid-2015.

Following his heroics at the end of the previous movie, Captain James T. Kirk (Pine) has found himself in hot water. After disobeying orders on a recent mission, Kirk has been stripped of his leadership duties aboard the U.S.S. Enterprise by his superiors. They’re not happy with his disregard for rules – a key one being to explore and observe other planets… as opposed to interfering.

Kirk’s time on the sideline will be short lived. Earth will be attacked – not by an alien adversary but rather someone from within. A top agent by the name of John Harrison (Cumberbatch) bombed the Star Fleet Archives in London, fired on Star Fleet Headquarters in San Francisco and then fled to a distant planet. What were his motives? Why did he flee?

After several lives are lost, Kirk is asked to head into the far-depths of space. The mission is not to apprehend Harrison but rather, destroy the uninhabited planet on which he is hiding. Kirk will be assisted by some familiar faces aboard the U.S.S. Enterprise including the by-the-book Commander Spock (Quinto), Lieutenant Commander McCoy (Urban), Lieutenant Sulu (Cho) and Lieutenant Uhura (Saldana). Not joining them is chief engineer Lieutenant Commander Scott (Pegg) who has concerns about the weaponry aboard the ship.

Details of the plot were kept tight-lipped prior to the film’s release and there are a few interesting twists in this tale. I particularly enjoyed rising British star Benedict Cumberbatch in the role of the villain. He’s a mysterious character who is clearly keeping his cards close to his chest, waiting to show them at an opportune moment. He’ll keep you guessing, that’s for sure.

The film comes with its fair share of adrenalin-pumping action sequences. In fact, I’d say there’s probably a few too many. Aside from a few meaningful conversations early in the film, there isn’t much in the way of character interaction. For example, there’s an interesting subplot about the tension between Commander Spock and Lieutenant Uhura but it never really goes anywhere. Other characters, such as Ensign Chekov (Yelchin), are hardly seen at all.

Star Trek Into Darkness is worth a trip to the cinema but be careful not to set your expectations too high (fans especially). I’d say it ranks slightly below the 2009 reboot - it's good, not great.

You can read my interview with director J.J. Abrams by clicking here.