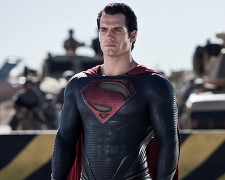 Seven years ago, Warner Bros. tried to bring this popular franchise back to life with Superman Returns. Everything seemed to be in place. Superhero movies were increasing in popularity. Director Bryan Singer had already proven himself with the X-Men series. Brandon Routh was a fresh-faced actor ready for stardom.

For whatever reason, it didn’t work. The film pulled in only $391m at the international box-office and while that may sound like a lot, it was just enough to cover the production and marketing costs. The studio had lost faith and a sequel, scheduled for release in 2009, was canned.

As the saying goes – if at first you don’t succeed, try again. Warner Bros. has coughed up another $225m and is having a second crack at revamping the franchise. This time around, they’ve gone with director Zack Snyder (Watchmen, 300) and brought in another newbie who is ready to make a name of himself, Henry Cavill (Immortals).

You can forget about the earlier Superman flicks because we’re going right back to beginning with Man Of Steel. The first scene of the film is set on the distant planet of Krypton where we witness the birth of our soon-to-be hero. The planet is about to implode (long story) so his parents throw him into an escape pod and send him off to the far distant planet of Earth. It’s the only way they can ensure the survival of not only their son, but their race as a whole.

The film’s first hour is its most interesting with two stories being told concurrently. The current day narrative sees Earth under attack from a rather passionate villain, General Zod (Shannon). Zod fled Krypton before it exploded and spent 33 years trying to locate Kal-El aka Clark Kent aka Superman. Having finally made it to Earth, he has plans to annihilate the human population and make it home to a new race of Kryptonians.

As we watch the drama unfold, we learn more about Superman and his past by way of flashback. We see him arrive on the planet and be raised by two loving parents. We see him get bullied at high school and watch him struggle to keep a hold on his super powers. We see his father warn him about humans and why he should keep his identity hidden. It seems we’re not quite ready to learn that we aren’t alone in the universe.

While I like the way the past storyline overlaps with that of the current day, there are still some puzzling gaps. There’s a scene where a young Clark Kent saves a school bus which has plunged into a river. He was clearly seen by the students on the bus so why weren't questions asked?. How else did the bus get out of the deep water? Don’t even get me started on a strange development where an alien space ship is found beneath the arctic ice. You’d think the authorities would show a little more concern when it suddenly flies away under Clark’s control.

I tried to like this film. I really did. For example, I was drawn to the heartfelt moments between Clark and his adopted father, Jonathan, where they discuss each other’s troubles. It’s a subtle, touching performance from Kevin Costner – one of his best in recent years. Unfortunately, these scenes are easily forgotten when you see the silly, comical way in which Jonathan meets his fate. It makes no sense.

Man Of Steel suffers most in its final hour where in degenerates into a seen-it-all-before, CGI-laden action fest. Time could have been spent developing the fun relationship between Clark Kent and snoopy journalist Lois Lane (Adams) but instead, we get punches, explosions and buildings falling over. Michael Shannon trots out cheesy lines like “either you die or I do”. Oh, and let’s not forget that Superman is always in the right place at the right time to save the day. He’s the king of convenience.

A sequel is planned but as we learned with Superman Returns in 2006, nothing is guaranteed in Hollywood. I think there’s hope for this rebooted franchise but would like to see something more engaging next time around.

You can read my interview with director Zack Snyder by clicking here.