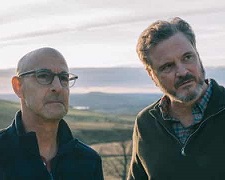 Supernova combines the essence of two films we’ve seen released in Australia over the past two months.  The Father was the story of an elderly man battling dementia while Blackbird followed a dying woman as she caught up with friends and family for the last time.  In this British drama, directed by Harry Macqueen, we’ve got a writer, Tusker (Tucci), diagnosed with early onset dementia.  Accompanied by his long-term partner, Sam (Firth), they set out on road trip across England to reminisce and dine with old friends.  They may not say it openly but it has the appearance of one “final holiday” before Tusker’s sharp mind slips away.

The film isn’t so much about who they visit or where they go (acknowledging there’s some beautiful scenery) but rather, the interaction between the pair over the space of a few days.  There’s a sincere chemistry between Colin Firth (The King’s Speech) and Stanley Tucci (The Lovely Bones) and, as illustrated by an early scene where they jokingly bicker over small details, you get a strong sense of the long-term, loving connection between them.

Firth and Tucci have worked together before (2001’s Conspiracy), have been friends for two decades, and they currently reside near each other in London.  They were also born just two months apart with each celebrating their 60th birthday late last year (they’re looking good for their age).  I’m sure their real-life closeness helped but kudos also belongs to Macqueen in extracting these genuine performances.

It’s the great script which provides the foundation.  There are times when the two characters are engaged in intense arguments with each trying to convince the other of their viewpoint.  They’re intelligent, persuasive and stubborn.  On the flip side, there are times when dialogue is wisely avoided.  We know what Sam and Tusker are feeling so there’s no reason to verbalise their thoughts and create unnecessary melodrama.

While there’s much to appreciate during the relatively short 93-minute running time, Supernova offers something to reflect upon after the credits have rolled.  It can be so painful to watch a loved one lose their memory and judgement to this debilitating condition.  The film asks us to think about our reaction to the same situation – from both the perspective of the sufferer and the caregiver.  The questions are tough and the answers are even tougher.