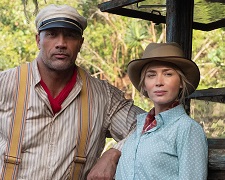 Twenty years ago, Disney curiously greenlit an action blockbuster based on an amusement ride at its Los Angeles theme park.  The film was Pirates of the Caribbean: The Curse of the Black Pearl and, in addition to earning Johnny Depp his first Academy Award nomination, it spawned a franchise that grossed more than $4.5 billion USD at the global box-office.  It’s easy to be cynical but it shows that when it comes to screenwriting, inspiration can come from unusual places.

Studio executives will be hoping that history repeats.  Jungle Cruise was a boat ride that formed part of the first Disney amusement park when it opened back in 1955.  It’s gone through a few changes over the years but the ride still exists today.  A script was written, Dwayne Johnson came on board as a producer, the directing reigns were handed to Spaniard Jaume Collet-Serra (Orphan, Unknown), and the finished product can now be seen in cinemas… and on streaming due to COVID-19.

Jungle Cruise is a mix of realistic fiction and supernatural oddities.  It’s set in the year 1916 and is centred on Dr Lily Houghton (Blunt), a gifted British scientist who cannot gain the respect of her peers simply because she is a woman.  There’s an early scene where Lily’s younger brother (Whitehall) must present research on her behalf to The Royal Society in London because women were not allowed to be members (the first wasn’t admitted until 1945).

Determined to prove her worth, she sets off to Brazil with hopes of locating a long-lost magical tree with “petals that can heal all”.  Needing transportation to navigate the windy, dangerous Amazon River, she teams up with a joke-loving steamboat owner, Frank (Johnson), to go in search of the plant.  On their tail is an unpleasant German (Plemons) who wants the tree for himself and sees it as critical to his country’s success in winning World War I.

Many will be drawing comparisons with the likes of Indiana Jones and Pirates of the Caribbean.  Jungle Cruise has been crafted as a light-hearted family escapade with lots of running, chasing and evading.  Despite the best intentions, it comes across as a very unadventurous adventure.  There’s almost too much going on.  There’s no time to soak in any tension (we can blame the feeble villains for that) and, while our strong-willed heroes love a chat, they come across as one-note, empty and uninteresting.  It’s just the same repetitive stuff throughout (e.g. jokes about Lily’s “posh” brother being out of his element).

Coming across more as a hokey throwback to films from a prior era, Jungle Cruise might schmooze people with the casting of Dwayne Johnson and Emily Blunt but it misses the opportunity to be something fun, original and contemporary.