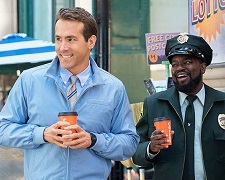 Free Guy is Pleasantville meets The Truman Show meets Wreck-It-Ralph.  Since I love all three of those movies, that’s perfectly fine with me!  The opening scenes introduce us to Guy (Reynolds), a character inside a super popular video game.  He’s referred to as an NPC – a “non-playing character” who has no impact on the game, does the same thing repeatedly, and is largely relegated to the background.

His daily routine consists of waking up in a one-bedroom apartment, making breakfast, walking to work, buying a cup of coffee, working as a bank teller, and waiting for robbers to come in and steal money.  It’s reminiscent of Bill Murray in Groundhog Day except that Guy doesn’t know anything different.  His entire existence has been the same repetitive loop.

And then… something changes.  Guy sees a beautiful character within the game (Comer) who is controlled by someone outside of it (also Comer).  The pair interact and Guy starts to develop a mind of his own.  He stops going to work, he starts fighting bad guys, and he explores parts of the computer game world he never knew existed.  Could this be artificial intelligence?

Directed by Shawn Levy (Night and the Museum, The Internship), Free Guy has a great sense of humour and explores some fun ideas.  His adventures have an impact on other NPCs within the game who ask themselves philosophical questions about whether there’s more to life (ala Pleasantville).  As this all takes place, we follow the perspective of the real world where people are tuning into the game (ala The Truman Show) to learn more about the character who has seemingly come alive (ala Wreck-It-Ralph).

I’ll the first to admit that Ryan Reynolds feels like he’s playing the same goofy klutz he’s played in a bunch of other recent movies like Deadpool and The Hitman’s Bodyguard.  That said, it’s hard to imagine another actor stepping into Guy’s shoes and creating something equally memorable.  From his over-the-top expressions to his general naivety, Reynolds ensures the jokes hit the mark.

The supporting players also pull their weight.  In her biggest cinema role to date, Emmy Award winner Jodie Comer (Killing Eve) is excellent as the spirited woman who first realises Guy’s intelligence and potential.  Taika Waititi (Jojo Rabbit), using as much improvisation as possible, is hilarious as the eccentric video game boss who loves a creative insult.  There’s also a bunch of cameos which shouldn’t be spoiled.

More entertaining than I expected it to be, Free Guy is a winning comedy.