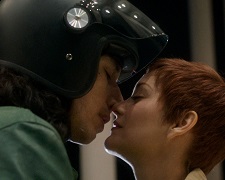 Three months ago, I’d never heard of the America music duo Sparks.  Now, having seen Edgar Wright’s brilliant documentary (The Sparks Brothers) twice on the big screen, I know Ron and Russell Mael as two incredibly gifted artists who have forged a 45-year career in the music industry by staying true to themselves and continually taking chances.

Now, for the first time, they’ve got a screenwriting credit to add to their impressive resume.  Back in 2012, French director Leos Carax used a Sparks song in his warped drama Holy Motors.  Ron and Russell reached out to simply say thanks and, in the process, pitched the idea for an off-beat movie musical they’d been working on for some time.  Annette is the end result and it arrives in Australia with buzz having won the best director prize at the Cannes Film Festival last month.

If you’ve seen Holy Motors or other works from Leos Carax, you should know to expected the unexpected.  Annette is a head-scratching mix of reality and fantasy that doesn’t always make sense… but that’s part of its allure.  The opening titles are proof of that.  The film begins with Ron and Russell Mael (playing themselves) performing a song called “So May We Start” as they interact with stars Adam Driver and Marion Cotillard (playing characters).  It’s reminiscent of the opening to the successful Broadway musical Pippin in that it’s trying to break the fourth wall.

From thereon, I’d describe the movie as a dark, Shakespearean-like fairy tale.  Henry (Driver) is an edgy comedian / performance artist for whom no topic is taboo.  Ann (Cotillard) is a renowned soprano who continually sings in front of large, sold-out crowds.  The pair meet, fall in love, get married and have a daughter.  A standard romance, right?  Oh, did I mention the child takes the form of a wooden marionette puppet?  It’s probably worth noting.

This film could have been messy in the wrong hands but Annette succeeds because of Leos Carax’s gutsy direction.  It’s a hypnotic experience in the way the camera hovers around these characters (often at a distance) from a variety of angles (sometimes looking up, sometimes looking down).  The use of lengthy, unedited shots creates an intensity that is hard to shake.  The emotive music, sung live on set as opposed to later in a recording studio, adds authenticity to key scenes.

I wouldn’t be recommending this film to everyone but if you’re after an experience as much as a movie, Annette delivers.