Review: Shang-Chi and the Legend of the Ten Rings 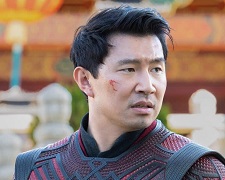 Having a fractured, uneasy relationship with your father is not uncommon… but this latest Marvel release takes it to a bizarre and heightened level.  When we first meet him, Shaun (Liu) comes across as a run-of-the-mill Asian American living in San Francisco.  By day, he’s working hard as a hotel valet (a curious decision given his college education) and by night, he’s frequenting karaoke bars with his best friend, Katy (Awkwafina).

He doesn’t mention his upbringing and there’s a good reason for that.  His father, Xu Wenwu (Leung), is thousands of years old and has villainously accumulated wealth and power over that time.  The device that provides his immortality and incredible strength is a series of ten rings that he wears like bracelets around his arms.  Shaun was trained by his father and became a Kung Fu warrior but, upon reaching the age of 14 and gaining a stronger sense of morality, he fled to San Francisco and started a simpler, more honest life.

To borrow one of my favourite sayings – “we may be through with the past… but the past ain’t through with us.”  Goons hired/trained by Wenwu come after Shaun and steal a green pendant left to him by his late mother.  It is believed the pendant will guide the way to a hidden kingdom that will allow the ten-ring wearing Wenwu to gather even more power.  It falls upon Shaun, his estranged sister (Zhang) and the confused Katy to stop Wenwu and save the world.

Much has been made of the fact that while this is the 25th film in the Marvel Cinematic Universe, it’s the first with an Asian director, an Asian leading actor, and a predominantly Asian cast.  It shouldn’t have taken this long but it’s nice to see Marvel Studios catching up with the times.  There’s an Australian connection also.  Most of the shoot took place at Fox Studios in Sydney with production halted for several months when COVID-19 lockdowns came into effect in March 2020.

There are two terrific action scenes to open the film – one on a runaway bus weaving through the hilly streets of San Francisco, and the other on the scaffolding of a skyscraper in Macau.  They provide a shot of adrenalin while also highlighting the skills and personalities of these fun, interesting characters.  Simu Liu captures the right mix of strength and reluctance as Shaun (who comes to be known as Shang-Chi), Awkwafina utilises her comedic talents in delivering great one-liners, and Meng’er Zhang is superb as the sister with a “chip on her shoulder” and with a point to prove.

42-year-old director Destin Daniel Cretton (Short Term 12, Just Mercy) deserves praise in bringing this cool world to life (the maze forest is awesome) and choreographing the aforementioned battle sequences.  Further, the film doesn’t get too bogged down with action (well, except towards the end) and that provides time for meaningful character development and an exploration of family dynamics.

Shang-Chi and the Legend of the Ten Rings is one of the better superhero flicks we’ve seen in recent years.