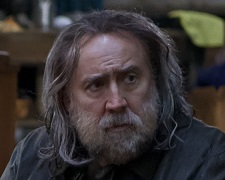 At the start of the year, I didn’t know what a truffle hunter did.  Now, I’ve seen two films which have provided both laughs and insight.  The first was The Truffle Hunters, an excellent documentary about elderly Italian men going to search of one of the rarest, most expensive foods in the world.  The second is Pig, a fictional action drama with Academy Award winner Nicolas Cage (Leaving Las Vegas) in the lead role.

The character refers to himself as “Rob” but it’s almost irrelevant given how few people he interacts with.  For over a decade, he’s lived in a small, wooden shack hidden deep within a forest in Oregon.  There’s not much to his daily routine.  He takes his beloved pig, who sleeps by his side of an evening on its own mattress, and scours the area for high-quality truffles.

This funds his reclusive lifestyle but in an unorthodox manner.  A young go-getter, Amir (Wolff), drives to the shack every few days, collects the truffles, and, as part of an exchange, provides Rob with basic groceries including tinned food and batteries.  Amir offers nicer things (such as a mobile phone) but Rob isn’t interested.  He’s content with his simple, lonely, uncommunicative life and, evidenced by the fact he’s done it for so long, doesn’t want to change a thing.

That is until some bad folks rock up one night, bash him over the head, and steal the pig.  Rob’s not the “forgive and forget” kind of guy.  He teams up with a semi-reluctant Amir, returns to civilisation, and goes on a vigilante-style mission through some seedy parts of Portland, Oregon to retrieve his prized pig.  In the process, he must confront people from his past and we learn why he detached from society in the first place.

Credit goes to first-time writer-director Michael Samoski and co-writer Vanessa Block for coming up with such a warped, curious idea.  Part of Samoski’s inspiration was exploring the ways in which a heavy loss, such as the death of a close family member, can change one’s view of the world and therefore, how they choose to live in it.  There’s a fair bit to unpick here and Pig provides a nice balance of intrigue and dramatic action.

Nicolas Cage is very good.  It may not sound like a “Nicolas Cage role” but if you’ve seen some of his recent works (Willy’s Wonderland and Color Out of Space spring to mind) you’ll realise that he’s not afraid of playing strange, nutty characters and working with first-time filmmakers.  He gives a strong, dialogue-light performance as the dishevelled Rob and it’s not a role that other Hollywood big names could take on and be equally convincing.  I also liked Alex Wolff (Hereditary, Old) as his likeable offsider with an interesting backstory of his own.

Clocking it at a tight 92 minutes, Pig is a pleasant surprise.